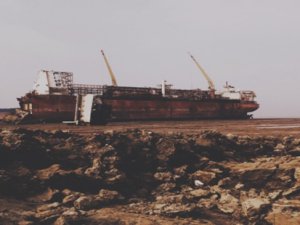 The judgment was issued in a Public Interest Litigation (PIL) filed by Bangladesh Environmental Lawyers Association (BELA), a member organisation of the NGO Shipbreaking Platform.

Already in August 2017, the Bangladesh Court had issued an injunction on the ongoing breaking of the North Sea Producer based on the detection of radiation levels higher than permitted.

It has now directed national agencies to monitor the breaking of what is left of the FPSO without any involvement of Janata Steel, the yard that had beached the vessel in 2016. The Department of Environment has also been directed to claim compensation from the yard for having violated national environmental rules.

“The judgment is important in that it has expressly called the import, beaching and breaking permits illegal, and for the first time a breaker has been put off the breaking operation and the government has been given the steering,” Syeda Rizwana Hasan – Supreme Court lawyer and Director of Bangladesh Environmental Lawyers Association.

“It is even more important because it has required the government to regulate the dubious roles of the cash buyers and restrict import from grey- and black-listed flag registries.”

The Court ruling directed authorities to subject cash buyers and agents to stricter scrutiny, regulate the import of vessels registered under “last voyage” grey- or black-listed flags and ensure that no vessel is imported without proper verifiable pre-cleaning certificates and declarations of in-built hazardous wastes.

After winning the case on the illegal import and beaching of the North Sea Producer, owned by Danish A.P. Moeller Maersk and Brazilian Odebrecht, NGOs now urge the UK to hold the ship owners and cash buyer GMS accountable for the illegal export of the toxic FPSO.

This news is a total 380 time has been read
Tags: Bangladesh, FPSO, North Sea Producer, Shipbreaking.