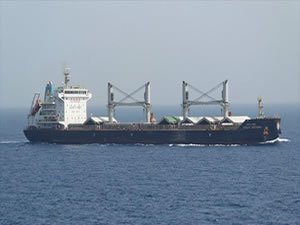 Unconfirmed reports this morning from Bangladesh are that one of its sailors was killed in the latest Russian missile attack on a commercial ship.

Fears continue to rise for the ships caught in the fighting in Ukraine with additional reports of vessels coming under attack or being stopped in the region.

Unconfirmed reports this morning from Bangladesh are that one of its sailors was killed in the latest Russian missile attack on a commercial ship.

The bulker Banglar Samriddhi, a four-year-old bulker registered in Bangladesh was reported stranded at the anchorage off the Port of Olvia, located in the Mykolaiv region on the left bank of the Dnipro-Bug estuary on the northern Black Sea coast.

The 38,800 dwt vessel said that it had a crew of 29 with supplies to last no more than two weeks. After the beginning of the war, the crew reported that they were stranded when Ukraine closed its seaports, but that there was no fighting in the immediate area.

They called on the Bangladesh government to take the steps necessary to rescue them while the Bangladesh Shipping Corporation said that its chartering department was working to move the vessel to a safe location.

The Ukrainian Sea Ports Authority is reporting that the vessel was struck earlier today by one Russian missile hitting the superstructure of the vessel.

The Ukrainian authorities reported that two tugs were sent to assist the vessel and that they believed there were no injuries among the crew.

A Bangladesh newspaper, The Business Standard, however, is quoting a sailor aboard the vessel that said the third engineer of the vessel was killed during the attack.

The report said that the crew was able to control the fire after the vessel was hit and that the other crew members were uninjured.