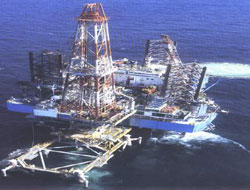 India's three state-owned oil refiners said commercial banks had stopped lending to them owing to the industry-wide liquidity crunch and the high debt these companies have accumulated because they sell petroleum products below production cost.

India's three state-owned oil refiners said commercial banks had stopped lending to them owing to the industry-wide liquidity crunch and the high debt these companies have accumulated because they sell petroleum products below production cost.

Oil companies raise their dollar requirements from both foreign and domestic banks. They also spend their rupees to buy dollars from the money market. They typically require around $1 billion a week (at the current crude oil price of around $90 a barrel) to meet the country's oil import requirements. India imports over 70 per cent of its oil needs.

Now, these companies are finding access to funds all but impossible. "Domestic banks have stopped lending to us," said a senior Indian Oil Corporation [Get Quote] official on condition of anonymity. "We can still buy dollars from the market provided we have the money to buy them," he added.

Banks, however, also stopped dollar loans to the oil marketing companies a month ago, the IOC official added. An executive from Bharat Petroleum, India's second-largest importer, confirmed this.

IOC is the country's largest crude oil refiner and marketer of petroleum products, and spends around $3 billion buying crude oil every month. The company has borrowing of over Rs 60,000 crore (Rs 600 billion) on its books, around 20 per cent of which is dollar-denominated as on September 30, 2008.

KPMG Advisory's Executive Director Arvind Mahajan thinks there is still a lot of money in the system but banks are not willing to lend. "There is a lack of trust in the market," he said.

The oil companies' credit crunch has worsened because overnight borrowing (or "call") rates - the other funding route - touched 16 per cent last week.

The borrowing of the oil marketing companies are high because the government is still to issue bonds that partly help bridge under-realisations from market sales.

"If we do not get new bonds, October 31 could be the last day we will import crude oil," the IOC official said. IOC alone is yet to receive Rs 34,000 crore (Rs 340 billion) worth of bonds, which has increased its borrowing and interest burden.

The government is likely to issue the bonds under the supplementary demand for grants once Parliament meets on October 17.

However, BPCL's finance director SK Joshi is confident that the government, which owns majority stakes in these companies, will not allow them to reach crisis point. "The government is completely aware of the situation," he said.

This news is a total 1461 time has been read