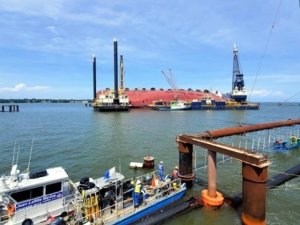 Miller said that work is proceeding at the site with the added precautions. The St. Simons Sound Response had previously reported that more than 400 people and 70 vessels were involved with the salvage operation.

The Golden Ray salvage project, one of the largest and most unique salvage projects being carried out, now has to deal with COVID-19 in addition to its other challenges ranging from the weather on-site to the environmental dangers and unique engineering of the operation.

Crew members aboard one of the barges working at the salvage location tested positive for the COVID-19 virus. US Coast Guard spokesperson John Miller told The Maritime Executive that they were taking added precautions for the virus, including isolation of the infected crew and deep cleaning of the barge on which the crew was working.

Miller said that work is proceeding at the site with the added precautions. The St. Simons Sound Response had previously reported that more than 400 people and 70 vessels were involved with the salvage operation.

The preparations for the heavy lift vessel VB -10,000 were not impacted at the Port of Fernandina in Florida. The Unified Command managing the project announced that the twin-hull heavy lift vessel arrived in Florida on July 3 for final modifications and function checks before heading to wreck site in St. Simons Sound.

The lift vessel, however, had been scheduled to arrive at the wreck site by mid-July, but Miller now said they were expecting the vessel would be on site by late July, depending on weather and other factors. The Unified Command will hold its next briefing when the lift vessel is en route to the wreck site.

The Unified Command, consisting of the U.S. Coast Guard, Georgia Department of Natural Resources, and Gallagher Marine Systems, with assistance from federal, state, local, and partner organizations, was established shortly after the September 2019 accident. On-site work began shortly after the incident, first placing safety booms, lightening the onboard fuel, and later beginning to remove elements including the rudder, propellers, and most recently the car ramp. They also attached the lifting lugs required for the salvage operation, which will cut the vessel into sections and lift it with the VB-10,000.

This news is a total 1951 time has been read
Tags: Barge Crew at Golden Ray Site Tests Positive for COVID-19