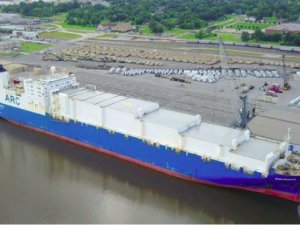 On Wednesday evening, the U.S. Coast Guard and the Texas General Land Office launched a response to a fuel spill after an accident involving the towboat Savage Pathfinder and the ro/ro Endurance at Dock Four near Port Arthur, Texas.

Local media report that the Savage Pathfinder's barge tow made contact with the Endurance while preparing to transfer fuel. No injuries were reported.

An estimated 13,000 gallons of marine diesel was discharged after the collision. The source of the leak has been secured and cleanup efforts are under way, and the cause of the incident is under investigation.

Coast Guard Marine Safety Unit Port Arthur and TGLO personnel attended the scene to investigate and respond to the spill. A containment boom was placed around a vessel, and crews continued recovery efforts on Thursday. The USCG has issued a marine information broadcast to alert mariners transiting near Texaco Point and Port Arthur.

"We are working with TGLO, the responsible party and all maritime stakeholders to minimize impact as quickly as possible," said Capt. Jackie Twomey, federal on scene coordinator and commanding officer of MSU Port Arthur.

As of Friday, the Endurance was moored at a multipurpose terminal in Port Arthur, and the Savage Pathfinder was moored near a barge fleeting area at the 1000 Foot Cut Fleet facility on Humble Island.

The 1996-built Endurance is a 50,000 dwt ro/ro owned by American Roll-on Roll-off Carrier (ARC) and managed by TOTE Services. She is U.S.-flagged, and according to ARC she has just returned from Belgium with 1,400 helicopters, vehicles and other units belonging to the 1st Cavalry Division.

According to tug index site TugboatInformation, the Savage Pathfinder is a 1976-built towboat originally christened the Miss Polly. She was acquired and renamed last year.

This news is a total 773 time has been read
Tags: Barge-Ro/Ro Collision Leads to Spill in Port Arthur