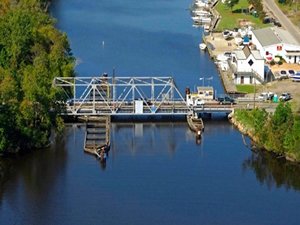 The U.S. Coast Guard has launched an investigation into the circumstances of an allision between a barge and a bridge span on the Intracoastal Waterway near Chesapeake, Virginia.

On Saturday morning at about 0445 hours, a barge struck the end of a swing bridge on the Centerville Turnpike, about 10 miles south of Norfolk.

Photos from the scene appear to show minor damage to one end of the span.

The bridge is currently in the open position and vehicle traffic is closed until an assessment and repairs are completed.

A Coast Guard marine investigating officer and marine inspectors from Sector Virginia were dispatched to the scene to start an investigation into the cause of the allision.

A traffic restriction is in place banning vessels from approaching or passing within 100 feet of the bridge, and a small boat crew has been deployed to enforce the waterway restriction.

The name of the towing vessel and operator have not been disclosed.

The Coast Guard has asked anyone with new information on the circumstances of the incident to call in to Sector Virginia.

In 2019, the same bridge was lifted off its foundation and temporarily relocated for repairs and restoration. The route was shut to motorists for a period of six months.

This news is a total 2351 time has been read
Tags: Barge Strike Closes Drawbridge Near Norfolk