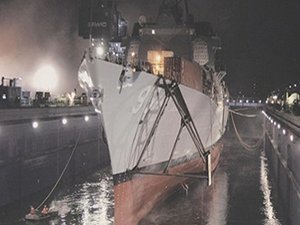 The union's negotiating committee said in a statement Saturday that it had succeeded in securing its highest-priority changes to the yard's proposal - in particular, keeping existing restrictions on the use of non-union subcontractors.

"Being able to reach a tentative agreement to bring back to our membership that keeps our subcontracting language unchanged, continues to protect seniority, and attain a modest economic package is what we were able to do," the negotiating committee wrote. "We believe this agreement gives BIW the tools they need to have, and the ability to respond to the unpredictability of their day to day needs."

Among many other details, the union's leaders reported that the deal includes:

keeping the current contract language on subcontracting, with a temporary "catchup phase" allowing BIW to retain subcontractors through the end of the year.

the same pay proposal that BIW originally offered, including a three percent raise every year for three years.

"We are pleased to have reached agreement with our union partners and look forward to getting back to the job of building ships for the U.S. Navy," said Phebe Novakovic, General Dynamics' chairman and CEO.

“This agreement, coupled with our hiring initiatives and major investments in facilities and production processes, positions BIW and LS6 to partner together to improve schedule performance, restore the yard’s competitiveness and ensure Bath Built remains Best Built for generations to come," said BIW President Dirk Lesko.

The union's membership must still vote on the contract, and that process is scheduled for August 21-23.