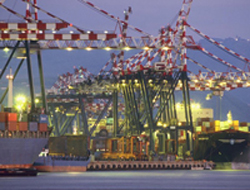 "THERE is no truth to this?, says Cecilia Battistello with more than a little anger ?If the question is whether there is a mafia or not (in the Gioia Tauro area), I would say there is, but it is not in our port.?

"THERE is no truth to this?, says Cecilia Battistello with more than a little anger ?If the question is whether there is a mafia or not (in the Gioia Tauro area), I would say there is, but it is not in our port.?

Ms Battistello, chairman of Contship Italia, was speaking at a press conference in Milan called at least in part to address the allegations made in a recent report by a parliamentary commission on the mafia.

She argued that, far from bowing to the demands of the Calabrian "ndrangheta, a particularly close-knit and fast-growing variant of the mafia, the Medcenter Container Terminal in Gioia Tauro had worked consistently and successfully to keep organised crime outside the terminal gate.

?We would never pay a lira to organised crime. Rather than do that we would pack our bags and leave Gioia Tauro. We don"t need it enough to succumb to such demands. We have Tangier. We have Cagliari.?

The report, released last month by an Italian parliamentary commission on the mafia, covered the international expansion of the "ndrangheta from its Calabrian heartland, and focussed in part on its alleged infiltration of Gioia Tauro.

It claimed that MCT founder Angelo Ravano had submitted to mafia extortion in order to get his project off the ground, agreeing to a ?security tax? of $1.50 per container, and that the port, including MCT, had been extensively penetrated by organised crime ever since.

She said she had no interest in whether there was any deal between the "ndrangheta and Mr Ravano, who died shortly after the government gave the terminal the go-ahead. MCT, she said, had never made any such payment.

Indeed, she contended that it was MCT that reported a subsequent extortion attempt to the authorities, adding that it had since helped police foil several mafia attemtps to infiltrate the port, whether by smuggling its own men into the workforce or seeking to control port services.

Portraying the report"s discussion of MCT as an often inaccurate rehash of old and unfounded allegations, Ms Battistello said that ?if people are using the port (to smuggle goods illegally), it is not our duty to control it but that of the authorities,? in particular police and customs.

She also ridiculed the claim that the absence of mafia-instigated violence at MCT was itself evidence that the "ndrangheta controlled the facility, given its extraordinary influence in the local area.

She said the support of the authorities over the years had been fitful, arguing that the success of a strike at the facility last year was due in good part to intimidation that the local police had failed to prevent.

At the same time, and despite the consistent failure of successive Italian governments to invest in port and intermodal infrastructure, she said the company was committed to Gioia Tauro and to its other facilities around Italy.

Contship Italia expects to invest E261m in Gioia Tauro between this year and 2012. In the process, the company expects throughput at Gioia Tauro to rise from 3.5m teu to 5.4m teu over the period.

This news is a total 2027 time has been read