BDI turns back to negative 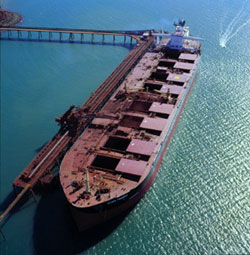 The past three sessions of the Dry Bulk Index (BDI) turned back to negative.

The past three sessions of the Dry Bulk Index (BDI) turned back to negative.

After a brief rally, the past three sessions of the Dry Bulk Index (BDI), which tracks rates for shipping commodities, like iron ore and coal, turned back to negative. Monday"s session, in reality followed the trend set at the end of the past week, with the BDI shedding 17 points, ending down at 801 points. It seems that the rebound of the past 10 days proved short-lived and the market has to endure freight levels close to all-time lows for quite some time. Dahlman Rose"s morning report indicated that it all comes down to steel demand, which in turn directly affects commodities demand like iron ore. According to steel production data for November, ?global production stood at 89 million tons, which represents a 10 million ton sequential decrease, and a 30 million ton decrease from the peak month of July? said Dahlman.

As a result, the 23 capesize iron ore cargoes fixed for China delivery last week (versus 22 cargoes the week before), don"t seem enough to support current freight levels, with both Australia and Brazil iron ore export activity slowing down considerably. This was reflected on Monday"s Capesize Index (BCI), which was down by a significant 50 points, at 1373, losing some of the previous gains. The Panamax index kept its momentum, being the only one recording gains during yesterday"s session, ending at 583 points, up by 8.
Commenting on the BCI"s trend, Barry Rogliano Salles (BRS) in its latest weekly report said that ?there are now fears that rates could drift as operators head into Christmas and the holiday period. Despite this, there was some period business to report: two modern 170,000 tonners were fixed for approximately one year at US$20,000/day and US$21,000/day respectively, with prompt delivery between December ? February?.

On a similar pace, explaining the recent upsurge of the panamax market, BRS said that ?the real situation is that there is an increase in activity prior to the Christmas break, and we still have yet to see a change in the underlying fundamentals?.

This news is a total 971 time has been read