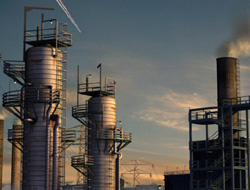 Without a quick end to the financial market crises and improvement in the global economic outlook, the bearish sentiment in the oil market is likely to continue, OPEC said Saturday in a statement to the International Monetary Fund.

Without a quick end to the financial market crises and improvement in the global economic outlook, the bearish sentiment in the oil market is likely to continue, OPEC said Saturday in a statement to the International Monetary Fund at its annual meeting in Washington, D.C. Media reports cited Mohammad Alipour-Jeddi, head of the Petroleum Studies Department of the Organization of Petroleum Exporting Countries, as saying that the U.S. financial crisis and continued deterioration in the world economy is likely to sustain a bearish oil market and pose a risk of oversupply in the first half of 2009.

"The shift to bearish market sentiment has been precipitated by a growing awareness of weakening oil market fundamentals, due to deteriorating economic prospects, an associated decline in oil demand growth and the healthy supply situation primarily from increased OPEC production," he said in the statement.

Iran predicted that OPEC would cut its oil output at its November meeting. Mohammad Ali Khatibi, Iran's OPEC representative, saying that the OPEC would likely seek the cut "in order to balance supply and demand."

OPEC's Alipour-Jeddi said in the Saturday statement that existing regulations have proved "insufficient to properly contain the negative impact of speculative activity in the market, which highlights the need to consider further measures."

He called for the extension of U.S. Commodity Futures Trading Commission monitoring procedures to the other regulated exchanges and the unregulated over-the-counter market and suggested ending regulatory loopholes that allow speculative positions to exceed existing limits.

This news is a total 1262 time has been read