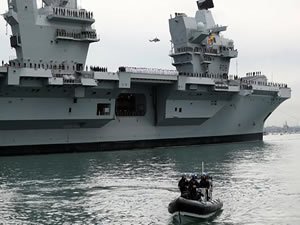 He argued that the "real source of militarisation” in the area emanates from the countries “outside this region sending their warships thousands of kilometres from home to flex muscles”.

The Defence Ministry spokesman pledged that the Chinese military “will take necessary measures to safeguard its sovereignty, security and development interests as well as peace and stability in the South China Sea”.

The remarks followed reports that the UK's newest aircraft carrier, the HMS Queen Elizabeth, may be deployed to the South China in the coming months as part of the vessel’s first operational mission.

In February 2019, then-UK Defence Minister Gavin Williamson confirmed that the Queen Elizabeth’s first operational mission would include the South China Sea, something that should add to “making a global Great Britain a reality”.

Also in 2019, media reports claimed that the aircraft carrier and its strike group are due to join units of the US military and Japan’s Self-Defence Forces near the Japanese Ryukyu Islands “as soon as early next year”.

The reported developments come amid ongoing regional tensions over South China Sea territories which apart from China are claimed by an array of countries, including the Philippines, Brunei, Malaysia, Taiwan, and Vietnam.

Despite having no claims to the territories, the US is also actively engaged in the dispute, sending its military vessels to the South China Sea for the so-called freedom of navigation missions, in what sparks harsh criticism from Beijing which rejects such acts as "provocations".

This news is a total 5092 time has been read
Tags: Chinese military