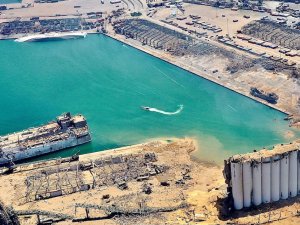 Two crew members of the Orient Queen cruise ship were reportedly killed in the deadly blast yesterday in Beirut, Lebanon.

The Orient Queen has now partially sunk next to the pier, across from the site of the explosion at the port of Beirut.

The Philippines’ Department of Foreign Affairs said in a statement that information from the Philippine Embassy in Beirut indicated that two seafarers from the Orient Queen died in the explosion.

The seafarers were among a group of 13 Filipino seafarers reported to be on the Orient Queen when the blast occurred. As of the latest update, 10 of 11 workers initially reported missing have been located and are now with the management of the shipping company Abu Merhi Cruises, which operates the Orient Queen.

Among those located, most suffered minor injuries while one is in critical but stable condition.

One seafarer is still missing, the Department said.

Tuesday’s blast is believed to have originated in a warehouse containing approximately 2,750 tons of ammonium nitrate which arrived at the port in 2014 aboard the MV Rhosus.

The initial blast badly damaged the Orient Queen, which began listing and sank overnight. Aerial photos and other media on Wednesday showed the ship capsized at its berth.

The MS Orient Queen was built in 1989 with capacity for 300 guests and 153 crew members. Due to the COVID-19 pandemic, there were no passengers on board and most likely a limited number of crew.

This news is a total 2844 time has been read
Tags: beirut blast, Orient Queen Cruise Ship