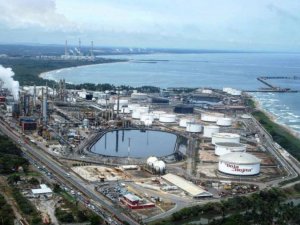 Venezuela's state oil firm PDVSA has launched an austerity drive aimed at cutting costs and expenses by half, according to Bloomberg.

In a memoto employees on Thursday PDVSA called on different business units, subsidiaries, joint ventures and staff to achieve a long list of money saving reforms without hurting its output of crude oil.

Among the belt tightening pratices proposed are reductions in the use of electicity, water, mobile telephones, computing gear and publicity materials.

Training activities, international travel, use of company aircraft and company credit cards are all to be curtailed. And video conferencing is recommended instead of face to face meetings.

PDVSA, properly named Petroleos de Venezuela SA, has been the fulcrum of the Venezuelan economy throughout the oil boom years as it controls the world's biggest hydrocarbon reserves, many of them offshore.

But in latter times it has been struggling, along with the national economy, as the price of oil dropped and allegations of corruption and mismanagement multiplied.

Earlier this month it was revealed that PDVSA has defaulted on billions of dollars of bonds.

This news is a total 758 time has been read
Tags: Beleaguered PDVSA sets 50% cost cutting target