Belgian an Dutch Navies Training on Mine countermeasures vessels 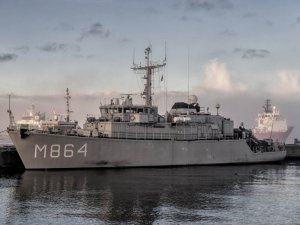 Since last week, the two teams of the Belgian-Dutch training centre for minehunters (MOST) are in action. They boarded the Dutch mine-hunter Zr.Ms. M863 Vlaardingen and the German minehunter FGS M1058 Fulda.

The crews of the German minehunter Fulda and the Dutch minehunter Zr. Ms Vlaardingen are currently undergoing intensive training for the Belgian coast. The Mine countermeasures vessels Operational Sea Training (MOST) prepares them for two weeks for participation in a NATO Response Force (NRF) or the Standing NATO Mine Countermeasures Group 1 (SNMCMG1).

Dutch and Belgian sea riders (inspectors) from both MOST teams worked out the scenario for the exercises in detail. They planned from minute to minute what awaited the crew of Fulda and Vlaardingen. During the exercises, they monitored how the sailors took on various challenges.

All parameters were tested before departure. Once in narrow waters, the sea riders started their simulations. The minehunter sailed towards Wenduinebank where after only half an hour the first incident broke out: a fire in the engine room. After the intervention of the first and second attack fire crew, the ship went into a blackout: all propulsion and electricity on board were lost. After the intervention of the third attack team, the fire was more or less under control.

Since the ship was out of control, the anchor was thrown out. From the control centre, the technical service tried to restart the ship. After eight minutes, they succeeded and the ship was able to continue on its way.

A few moments later, the helm broke and the ship again became out of control. Within two minutes, four sailors were already serving emergency helmets. Not an easy job if you know that they have to steer directly and without a hydraulic system, like on the big windjammers at the time.

After a quick bite, the crew was attacked by attacking boats. Here the Combat and Information Center (CIC) had to take action and help the ship to navigate in a certain pattern to avoid the attack. In addition, the guns were activated. In addition to the classic Mi.50 machine gun, the minehunter also has a number of MGs and an automatic machine gun Remote Oto Melara 27 mm, which they can operate from the CIC. The gunner can move and fire the gun with a joystick. It has a very precise optical camera and infrared camera: two effective components for protecting the ship.

After a fruitful day, the ship set sail for Zeebrugge. Before entering the 'crack', they launched the Seafox underwater drone to search for mines. When a mine is detected, the onboard divers take action to dive to the mine on site. Everything was prepared for the dive but due to a strong current, the divers got a no go to dive. After a cunning run, a diver allegedly came to the surface too quickly and was immediately evacuated to the hyperbaric tank onboard, like any German minehunter. When entering Zeebrugge via the tear-off pass, the bridge personnel were told that the fog was thick and they had to blindly wear instruments on Zeebrugge.

So it was a busy training day for the Fulda crew. In addition to the MOST inspectors, the ship had two German inspectors on board, including the commander of their training centre. The German navy has a similar MCM training centre in Kiel, on the Baltic Sea. There they test their fourteen mine-hunting platforms for their knowledge. Once successful, they can attend a two-week training course at the MOST for the coveted NATO certificate that allows them to participate in a NATO squadron.

The MOST was established in 1990. It is a training and evaluation centre for mainly Belgian and Dutch ships, also accessible to NATO ships and other navies. The organization was the first part of the school for mine clearance at sea in Ostend. In 2002 it was moved to the Naval Base of Zeebrugge, where she is still based.

The main task of the MOST is to prepare mine clearance vessels for mine clearance assignments. To prepare the ships for their missions, they receive thorough training and evaluation from the MOST evaluators for two to three weeks. The MOST team can rely on 30 years of experience and focuses on integration and standardization with NATO partners.

This news is a total 316 time has been read
Tags: Belgian an Dutch Navies Training on Mine countermeasures vessels