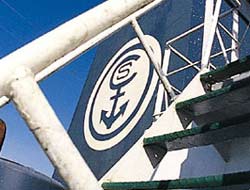 Belships says: "The positive increase in operating income and profit performance is mainly related to realised gain of USD 6.5 million upon terminating the charter party of M/S Belpareil plus a positive development for Elkem Chartering's Handysize Operation".

The company adds: "The dry cargo market rates continued to rise throughout the 1st quarter. An important driving force was an increased congestion in the ore ports in Australia and China. As the price of ore will rise after 1 April, it is also possible that the stocks were built up. Elkem Chartering's (EC) profit for the quarter includes a gain of USD 13 million (Belships share 50%) in connection with the termination of the company's financial interest in the Handymax ship M/S Belpareil. The Handysize Operation also made a good profit. The two remaining Handymax ships continued their charter parties with results as anticipated. Belship's own dry cargo tonnage, M/S Belnor and M/S Belisland, continued their respective charter parties with results as anticipated. The product tanker M/T Belaia was delivered during the quarter and commenced its five-year charter party to Danish charterers. The ship has functioned in an excellent manner as expected." The next few quarters seem positive for EC, both with regard to activities and results. The company's organisation in Singapore is now fully operational and we expect that a good deal of our activities will originate from there."