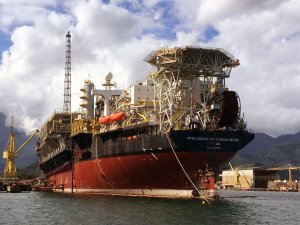 BG Group (LSE: BG.L), a world leader in exploration and LNG, today announced first oil from the Cidade de Itaguaí floating, production, storage and offloading (FPSO) vessel, the sixth unit to start production across the Group's significant discoveries in the Santos Basin, offshore Brazil. The FPSO will produce from the Iracema North area of the Lula field in the Petrobras-operated BM-S-11 block.

Anchored 240 km off the coast of Rio de Janeiro, the Cidade de Itaguaí is approximately 2 220 metres above the ocean floor. This is the second leased FPSO deployed on the Iracema development and will double the gross production capacity to 300 thousand barrels of oil per day and 16 million cubic metres of natural gas per day from the area. The FPSO will also be able to store 1.6 million barrels of oil.