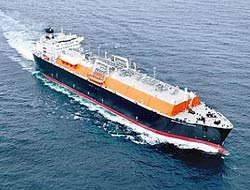 BG Group plc today announced that it has signed an agreement with Samsung Heavy Industries Co. Limited of South Korea for the delivery of two new-build dual-fuel diesel electric (DFDE) LNG ships. The new ships will each have a cargo capacity of 170,000 cubic metres (m3) and are scheduled to be delivered in 2010.

Martin Houston, BG Group Executive Vice President, Americas and Global LNG said: "Today"s agreement demonstrates our continuing commitment to build and operate LNG carriers of the highest standard. These two new vessels are sister ships to the vessels BG ordered from Samsung in 2006. Their addition to the BG fleet will further enhance performance and provide increased flexibility in meeting the growing demand by our customers throughout the world for natural gas."

Samsung will build, equip, launch and deliver the ships, which will use the GTT Mark III membrane cargo containment system. The new ships" design specifications are a repeat of the 170,000 m3 design which is intended to provide maximum flexibility for access into regasification terminals around the world while minimising transportation costs.

BG Group's current LNG shipping fleet consists of more than 20 vessels that are comprised of owned and chartered ships. To date, Samsung has constructed and delivered eight ships for BG Group. These new ships are intended to replace chartered tonnage when delivered.

The last of the eight vessels was the METHANE NILE EAGLE, delivered in December 2007. She is operated by BG Egypt, a subsidiary of BG Group and transports gas from the LNG facility at Idku, west of Alexandria.

This news is a total 799 time has been read