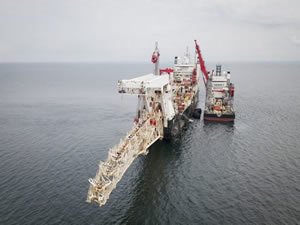 United States President Joe Biden stood by his decision to waive sanctions against the company at the helm of the German-Russian Nord Stream 2 gas pipeline project as he believes the move could have harmed connections with Europe.

Biden’s decision last week not to sanction Nord Stream 2 AG and its CEO, Putin’s ally Matthias Warnig, was met with bipartisan condemnation from US lawmakers.

Biden said he had opposed Nord Stream 2 from the beginning, but that it was almost completed by the time he took office.

“To go ahead and impose sanctions now would I think be counterproductive in terms of our European relations and I hope we can work on how they handle it from this point on,” Biden said Tuesday.

The Nord Stream 2 twin pipeline stretches approximately 1,230 km through the Baltic Sea from Russia to Germany, bypassing Ukraine, a route that largely runs parallel to the existing Nord Stream system.

The $11bn pipeline, now about 95% complete, will have the capacity to transport 55bn cu m of Russian gas a year to the EU, for at least 50 years.

Splash reported earlier this month that the US administration opted to sanction thirteen vessels involved in the construction of the gas pipeline, shortly after exempting the pipeline’s Russian operator and CEO.