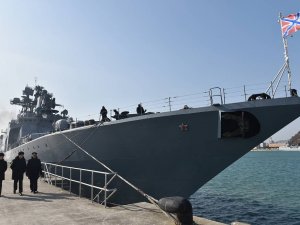 President Putin opened a series of meetings on military buildup and called to increase Navy capabilities.He said specific attention should be paid to warships and submarines armed with hypersonic Tsirkon missiles in order to preserve strategic stability.

Russian President Vladimir Putin opened a series of meetings on military buildup and called to increase Navy capabilities. He said specific attention should be paid to warships and submarines armed with hypersonic Tsirkon missiles in order to preserve strategic stability. Warships with Kalibr missiles should receive the new weapon. Upgraded big antisubmarine warfare ships of project 1155 will be also armed with Tsirkon, the Izvestia daily writes quoting Navy sources.

The Defense Ministry has decided to upgrade project 1155 warships. Sources in the defence industry said a project is ready to introduce major changes to the architecture. Universal vertical launchers will be installed to fire both Kalibr and Tsirkon.

The upgrade will develop project 1155 warships into frigates with a displacement of 7500 tons. They will be the biggest warships of the class in the Russian Navy. The displacement of the latest frigates of project 22350 is 4500 tons.

The firepower of the upgraded ships will be close to cruisers, former Navy Chief-of-Staff Admiral Valentin Selivanov said. "The combat capabilities will increase several times and the fleet will get a universal warship. Big antisubmarine ships will be able to fight U-boats, surface warships and even formations. No aircraft carrying force can repel a salvo of Kalibr and Tsirkon missiles. The new weapon can strike at ground targets, headquarters, airfields, communication hubs in coastal areas. The ships will retain their antisubmarine qualities and remain a dangerous enemy for U-boats," he said.

Hypersonic missiles are an important deterrence weapon. They can hit aircraft carrying forces, major warships and ground targets. The missiles accelerate to Mach 9 and destroy targets in a range of over a thousand kilometres. It is practically impossible to intercept them.

In 1990-2000s, the antisubmarine ships of the project visited distant areas of the planet more often than others, expert Dmitry Boltenkov said. "The ships embodied numerous solutions to the domestic defence industry and were very reliable. A successful gas turbine promoted faultless long sorties and the ships stayed away from Russian naval bases for months," he said.

However, modernization has long matured, as many big antisubmarine ships have been operational for over 35 years. Arms and control systems have progressed a lot during the time, the Izvestia said.