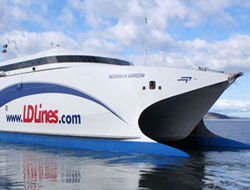 The ferry left Hobart, Tasmania, at 18.50 local time on Saturday, May 2, at the start of an 11,726 nautical mile voyage to the English Channel ports of Dover and Boulogne. Sailing a course via South West Australia (Fremantle), Seychelles, Suez Canal and Malta (Valetta), the Norman Arrow is expected to arrive on the Dover Strait in just three weeks time.

When it begins service on LD Lines' Dover-Boulogne route from 29th May the Norman Arrow will become the largest ever fast ferry to operate on the cross channel routes between England and France.

At nearly 11,000 gross tonnes the new craft is one of the largest vessels yet built by Incat, providing significantly greater sea keeping qualities and passenger comfort than earlier generation fast ferries familiar to Dover Strait passengers, a fact echoed by one of the Masters on board for the voyage, Capt Nick Dunn.

"It can match options given by standard ferries while retaining high speeds," he said.

The new craft will operate at speeds of 40 knots, provide a crossing time of just one hour and has capacity for 1,200 passengers, 417 cars, or combination of 195 cars and up to 30 freight vehicles.

The wheelhouse provides 360-degree visibility for the officers over the top of the aerodynamic superstructure, while an aft-facing docking console and CCTV monitors eliminate the need for bridge wings and their associated windage and weight. The bridge is fitted with the latest in electronic, navigation and communication equipment to comply with the High Speed Craft Code. There are three forward facing adjustable seats around the center line, the Captain sitting in the center, with the First Officer to starboard and the Chief Engineer to port.

The latest combustion chamber technology with electronically controlled injection system and optimized cylinder pressures, reduces specific fuel consumption to less than 190g/kWh. At almost a 7% reduction per kWh over the previous generation of medium speed diesel engines this represents a significant savings on annual fuel bills. The vessel is also environmentally compliant with low NOx of less than 10g/kWh.

Engine power is converted to propulsion thrust through four Wartsila LJX waterjets. In comparison with other available waterjets these offer a 25% reduction in mounting flange diameter, a 10% overall weight reduction and a 35% increase in cavitation margin. The jets have a 1,500 mm diameter impeller and an inboard layout for steering and reversing hydraulics.

A substantial weight savings comes through the use of Centa carbon-fiber shafts. Some 70% of weight has been saved compared to conventional steel shafts.

Hobart-based Colbeck & Gunton supplied the lightweight structural fire protection system aboard the ship including fire doors and dampers. To protect all moderate and high risk spaces the 'Rapid Access' (deckhead) and 'Lightweight' (bulkhead) fire protection system meets all the demands for lighter weight and faster installation/removal for this type of craft.

The craft is equipped with six Liferaft Systems Australia Marine Evacuation Stations (MES), three port and three starboard. Each MES is capable of serving a total of up to 300 persons. Fourteen, 100-person liferafts are fitted. Two SOLAS inflatable rescue boats, each with 25 hp motors, are provided for launch and recovery operations.

This news is a total 1109 time has been read