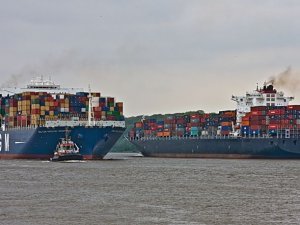 Following months of merger predictions, a clearer picture of the container market shakeout is emerging. Inside sources recently told media that CMA CGM is closing a deal to buy NOL.

For the COSCO deal, “the thumbs up from Beijing could come by the end of the year or in January, and a formal announcement of the merger will follow,” an insider told media. The Chinese government needs assurances first that jobs will not be lost through the merger, one of several obstacles remaining. Previous statements by analysts have indicated that getting minority shareholder approval could also prove difficult for a COSCO-CSCL tie-up.

The joined Chinese companies would leapfrog Hapag Lloyd and Evergreen to take the number four position in liner rankings by TEU, behind CMA CGM, MSC, and Maersk.

A new COSCO-CSCL would control nearly ten percent of global container capacity; all together, the new top four would control over half the world's TEU.

French company CMA CGM's deal for Temasek-owned NOL would bring CMA a presence in the Pacific trade, and would keep it ahead of the new Chinese giant by a margin of some 800,000 TEU.

While CMA CGM would not move ahead in the rankings by TEU, it would surpass current number two operator MSC by ship count, increasing its total to about 550 vessels owned or operated.

NOL has been unprofitable for some time; in February it sold its only profit-making subsidiary, APL Logistics. Continued losses for NOL's APL container line may have allowed CMA CGM to purchase at a favorable price, analysts told media, but may also pose risks to the combined company going forward.

CMA CGM recently announced that its profits were down $150 million in the third quarter, but up considerably for the first three quarters this year over the same period in 2014.

This news is a total 5348 time has been read
Tags: cma cgm, container, rate, big