Big gas troika on the way 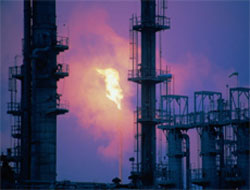 Iran is ready to set up a joint firm with Russia and Qatar but has no plans to export Iranian gas to Qatari plants so that it could be turned into liquefied natural gas (LNG), was reported on Tuesday.

Russia, Iran and Qatar agreed to boost coordination at a meeting in Tehran

Iran is ready to set up a joint firm with Russia and Qatar but has no plans to export Iranian gas to Qatari plants so that it could be turned into liquefied natural gas (LNG), was reported on Tuesday.

Russia, Iran and Qatar - respectively ranked first, second and third in the world in terms of gas reserves -agreed to boost coordination at a meeting in Tehran last month, and this month held a follow up meeting in Doha.

Russian gas monopoly Gazprom (GAZP.MM: Quote, Profile, Research, Stock Buzz) said in a statement when the Doha meeting took place that the three could team up to develop Iran's South Pars gas field, a vast reserve of gas of which the southern part is in Qatari territory.

Gazprom, Qatar Liquefied Gas Company Ltd and National Iranian Oil Company may agree to build a pipeline from South Pars to Qatar, where gas will be liquefied.

"There is agreement on setting up of a joint company which would be able to develop work in the three countries or any other world spot. But to have Iran's gas go to Qatar and be changed to LNG there, we do not accept that by any means," Iranian Oil Minister Gholamhossein Nozari was quoted as saying.

Despite its huge gas reserves, Iran has been slow to develop exports. Industry experts say U.S. sanctions, in particular, have hindered Iran's access to technology need to build LNG plants, although Tehran has several plans for such plants.

"The Islamic Republic agrees to the two countries, Qatar and Russia, investing in South Pars and the production of gas to be done on partnership basis in Iran," the minister said.

Some analysts have cast doubt on either Russia or Qatar investing heavily in Iran, saying such talk could well be political posturing.

Iran had said last month that three states had reached consensus on setting up a gas version of OPEC. Russia described the group as a "big gas troika."

Analysts say a gas body would not be able to turn gas taps on and off as OPEC does with oil, but it could share insights on upstream contract terms when it deals with gas investors.

Gas consumers like the United States and European states have opposed the formation of any gas body like OPEC, arguing that the market should set prices.

This news is a total 890 time has been read