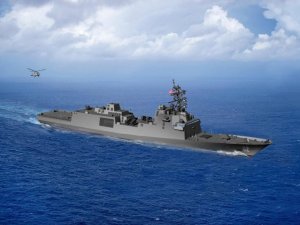 The Navy truncated orders for its ill-fated Littoral Combat Ship because the small vessels were vulnerable to attack and too lightly armed.

Now, a new report suggests that the frigate intended to replace it may cost 56% more than projected partly because it’s bigger.

The service projects that 18 of 20 new frigates will cost an average of $940 million each in inflation-adjusted dollars. The first two are estimated at about $1 billion each because of one-time costs.

But the Congressional Research Service alerted lawmakers this week to “a potential issue” worth reviewing: the accuracy of Navy cost estimates considering that “ships of the same general type and complexity that are built under similar production conditions” tend to have similar — and substantially higher — costs per ton of displacement.

CRS raised a warning because, at 7,400 tons, the frigate to be built in Wisconsin by a unit of Italy’s Fincantieri SpA is about three-fourths the size of an Arleigh Burke destroyer and carries many of the same weapons systems. The latest of the destroyers are estimated to cost $1.9 billion apiece.

That could put the cost for most of the frigates at as much as $1.47 billion each, “an increase of about 56%,” based on comparing their tonnage to the destroyers’, the research service said.

CRS suggested lawmakers ask the Navy the basis for “its view that the frigate — a ship about three-quarters as large” as the destroyer, with installed capabilities that are “in many cases” similar — “can be procured for about one-half the cost.”

The frigate, to be equipped with guided missiles, is intended as a better-armed and more survivable successor to the Littoral Combat Ship, which detractors called the “Little Crappy Ship.” Nonetheless, the Navy has 35 of them on contract.

At a confirmation hearing on Thursday, Kenneth Braithwaite, President Donald Trump’s nominee for Navy secretary, told the Senate Armed Services Committee that the administration’s goal of a 355-ship fleet over the next decade, up from 299 today, should be a minimum and “hopefully we build beyond that” despite budget constraints.

In written answers to the committee, Braithwaite said the future fleet should shift to fewer large surface platforms, more small surface combatants, a greater reliance on lightly manned or unmanned ships and “an ample submarine force.”

Asked to comment on the CRS report, Captain Danny Hernandez, spokesman for the Navy’s acquisition office, said the frigate is under “a fixed price” contract that “limits the government’s risk in contract execution” for any overruns. Hernandez said the Navy’s cost estimate is 1% higher than a separate one completed by the Pentagon’s independent analysis unit.

Fincantieri spokesman Eric Dent didn’t have a comment on the CRS report.

The CRS suggested lawmakers review how much “process improvements” at Fincantieri’s Wisconsin facility would permit frigates to be built in line with the Navy’s cost estimate. One version of the Littoral Combat Ship, which experienced schedule delays before improving, continues to be built at the shipyard by Fincantieri and Lockheed Martin Corp. The first frigate is set to begin construction in 2022.

The Navy’s cost estimate “suggests a significant risk” the frigate “will cost more than” projected, said Bryan Clark, a former director of plans for the chief of naval operations and now a Hudson Institute naval analyst. That shouldn’t be a surprise because the frigate “incorporates almost all the same combat capabilities” as the Arleigh Burke destroyer but with less capability, he said.

Fincantieri won an initial $795 million fixed-priced, detailed design and construction contract with incentive fees on April 30 for the first vessel in the new class of frigates and an option for nine additional vessels totaling $5.5 billion.