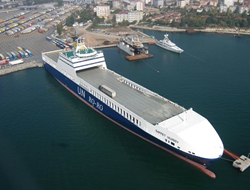 The New York-based buyout firm, which bought the operator of roll-on roll-off transport vessels for about 910 million euros ($1.23 billion) in 2007, plans to sell its majority stake in the Istanbul company next year, the people said, asking not to be identified because the matter is confidential.

KKR’s assets include private equity, credit, hedge funds and other alternatives to stocks and bonds. The firm has been among the most active buyout firms in deploying capital this year and last month sold about 1.1 billion-euros worth of shares with Permira Advisers LLP in ProSiebenSat.1. Media AG.

KKR bought 97.6 percent of the Turkish company, which counts 12 vessels in its fleet and operates routes to Italy’s Trieste, Toulon in France, and to Damietta in Egypt, in its first acquisition in Turkey and the bigger private equity investment in the country at the time. A spokeswoman for Goldman Sachs in London declined to comment, as did a KKR spokeswoman. U.N. Ro-Ro declined comment.

Unlike most European roll-on, roll-off operators, which specialize in short-sea crossings, U.N. Ro-Ro has developed long-distance Mediterranean routes linking Turkey with Trieste on the Adriatic in northern Italy and the southern French port city of Toulon. The sailings allow truck drivers to bypass the Balkan region, where highways are relatively underdeveloped.

UN Ro-Ro’s shipping to Egypt increased this year as about 80 percent of road transport to Syria shifted to ro-ro through Egyptian ports and then through the Suez Canal, Mustafa Yilmaz, owner of logistics company Cem-Ay Nakliyat said by telephone.

This news is a total 5127 time has been read