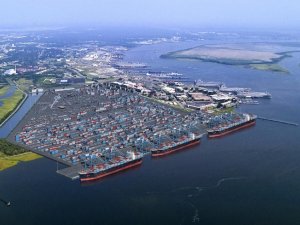 The South Carolina Ports Authority handled 14% more containers at its ports of Charleston, Georgetown and Greer during the 2015 fiscal year, compared to the volumes recorded in FY2014.

SCPA says that the increased volumes were due to the progress of the Panama Canal expansion and the Bayonne Bridge raising, which allowed for big ships to transition to East Coast trade routes. SCPA currently receives 11 post-Panamax vessel calls each week.

“The port’s ability to serve these companies’ supply chains played a key role in their decision to locate or expand in SC. Our strategic initiative to grow our cargo base is paying off.”

In the fiscal year ahead, SCPA expects to focus on increasing revenues to fund its capital projects, including the construction of the Navy Base container terminal by the end of the decade. FY2016 will also be a significant year for deepening the Charleston Harbor to 52 feet, with the Chief’s Report expected in September while the Preconstruction Engineering and Design phase is ongoing, followed by construction.

This news is a total 5519 time has been read
Tags: Charleston, container volumes, Georgetown, SCPA, The South Carolina Ports Authority.