Billions in Lost Trade: The True Cost of the Coronavirus 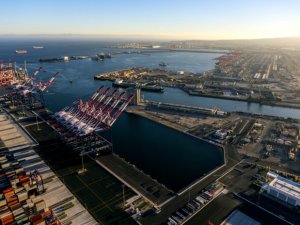 Just like plumbing, the flow of trade has a network of routes that resemble pipes to move commodities, tankers, cargo and containers around the world.

ust like plumbing, the flow of trade has a network of routes that resemble pipes to move commodities, tankers, cargo and containers around the world. Unfortunately, the transpacific route, which was already impacted by the US trade war with China, is now facing another trade blocker–the coronavirus.

Fears of transmission have led to the cancellation of dozens of sailings and vessels transporting fewer loads around the world. The decrease in TEU being transported have resulted in a container crunch which is now impacting intermodal jobs and the overall flow of trade in the United States.

You can see this container crunch at the ports.

“We’re estimating we’ll be off between 20 and 25% in cargo volumes for February,” explained Gene Seroka, executive director of the Port of Los Angeles. “It will be the softest month since we had a congestion issue here in 2015.”

At the Port of Long Beach, the easing has hit volumes by a collective 12% for the first two months of 2020. “Normally the port processes US$180 billion in trade,” explained Noel Hacegaba, the managing director of commercial operations at the Port of Long Beach, California. “That 12% in volumes translates into US$12 billion in lost trade. The movement of goods is the economy in motion.”

Traditionally at this time of year, the Port of Long Beach has 75 trains leaving daily. That number has been cut in half. “We have also seen a decrease in trucks moving containers,” explained Hacegaba. “We normally have 16,000 trucks a day at the port.  We now have around 8,000.”

This container crunch is now leading to furloughs. Shippers Transport Express, (STE), a motor drayage company whose clients are international carriers that transport out of East Asia, recently sent a Worker Adjustment and Retraining Notification (WARN) for their employees out of the Ports of Los Angeles and Long Beach.

COVID-19, a potential global pandemic, has very recently resulted in multiple foreign governments (such as the Chinese, South Korean, and Japanese governments) either shutting down or severely limiting importing/exporting from their ports for an indefinite period. This has caused STE’s clients to have their contracts either cancelled or placed in abeyance. Given only a limited amount of cargo, at best, is now being shipped through the Ports of Los Angeles and Long Beach, STE will immediately experience a near shutdown of its drayage operations for the foreseeable future. However, it may need a limited number of drivers to sporadically assist with limited cargo arriving intermittently.

Because China is the number one trading partner of the United States, the volumes of containers generated in this trade provide the supply of the overall containers the United States uses to export their products to other countries. With less trade flowing from China, certain areas around the country are facing a shortage of containers.

Outbound 40-foot container rail traffic from the major ports over the past three months shows the hit is not only being felt along the west coast. Volumes through LA and Savannah have plunged over the last 90 days.

“Thirty percent of our volume has been cut,” explained Bob Castelo, President of Marine Transport, and Container Services of New Jersey. Marine Transport has 12 terminals throughout the East Coast, Chicago and Texas.

But in times of crisis, opportunity can be found. The supply of reefer containers is also tight. “We have had an increase in reefer container repairs,” said Castelo. “Customers are getting them repaired while they can. Unfortunately, not all repairs can get done, some parts are made in China and we are not receiving them until June.”

The intermodal and maritime data coming out of China is indicating positive with blank sailings decreasing and drayage improving, but that does not mean things will go back to normal quickly.

“We have agriculture members that had their February export slot cancelled because of the blank sailings and now the earliest they can maybe book a spot on a vessel is maybe April,” explained Tim McGreevy, CEO of the US Dry Pea and Lentil Council. “Even if you have product in a container, you have to wait for the vessels to get back into position for trade to resume. It’s going to take time.”

This news is a total 902 time has been read
Tags: and Container Services of New Jersey, HAMBURG SUD, Marine TransportPort of Long Beach, Port of Los Angeles, STEUS Dry Pea and Lentil Council South African Development Agency Plans "Green" Ship Recycling FacilitySouth African officials have been contemplating a domestic ship recycling facility since at least 2011, and the idea is making a comeback.