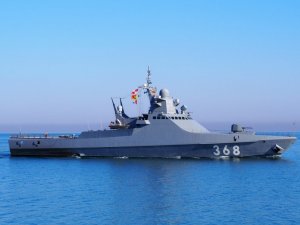 The Black Sea Fleet’s patrol ship Vasily Bykov departed the naval base of Sevastopol for its long-distance deployment to the Mediterranean Sea, a source in the Crimean defence circles told TASS on Tuesday.

The Caspian Flotilla’s two cruise missile corvettes Uglich and Veliky Ustyug left the Russian Navy’s permanent Mediterranean task force the other day on a rotating basis. They will be replaced by two Project 22160 ships, the Vasily Bykov and the Dmitry Rogachev from Russia’s Black Sea Fleet.

The Vasily Bykov armament includes the Kalibr-NK cruise missile, aerosol camouflage, two grenade launchers and two machineguns and a 76.2 mm dual-purpose gun (AK-176). The ship also has a helicopter deck and hangar for one Ka-27 or a Ka-226 helicopter. Besides, the warship carries a landing speedboat. It can carry various drones, underwater unmanned craft and unmanned boats. There is accommodation for an additional 60 men.

The Vasily Bykov is the Project 22160 lead ship laid down at the Zelenodolsk Shipyard in the Volga area in 2014 and made operational in the Russian Navy in 2018 after its construction was completed at the Zaliv Shipyard in Kerch. The patrol ship was designed by the Severnoye Design Bureau (part of the United Shipbuilding Corporation).

In 2013, Russia started to create a new operational Mediterranean task force. Russia’s new permanent task force is dealing with planned and urgent combat missions arising in the Mediterranean theatre of operations, including warding off threats to Russia’s national and military security.

This news is a total 892 time has been read
Tags: Russian Navy’s, permanent Mediterranean, Vasily Bykov