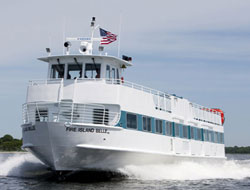 Built for Fire Island Ferries, Inc., Bay Shore, N.Y., the recently delivered 85 ft Fire Island Belle is the latest in a long-line of vessels built for the owner by shipbuilder Blount Boats of Warren, R.I.

Built for Fire Island Ferries, Inc., Bay Shore, N.Y., the recently delivered 85 ft Fire Island Belle is the latest in a long-line of vessels built for the owner by shipbuilder Blount Boats of Warren, R.I.

Built for Fire Island Ferries, Inc., Bay Shore, N.Y., the recently delivered 85 ft Fire Island Belle is the latest in a long-line of vessels built for the owner by shipbuilder Blount Boats of Warren, R.I. The 382-passenger, two deck, all aluminum commuter boat will be operating from Bay Shore to Fire Island on Great South Bay.

The triple screw vessel is powered by Detroit Series 60 Tier II diesel engines, delivering 600 hp each at 2,100 rpm with 2:1 ZF 550 reduction gears. At a displacement of 42 tons, she cruises at 19 knots at 70 percent horse power on a 7.5 mile run. Recently, at the same cruising speed, the burn rate was 17 gallons per engine with a complement of 300 passengers.

The Fire Island Belle has been certified under U.S. Coast Guard, subchapter K Rules and Regulations. She was based on the original design of the Firebird, built by the Blount shipyard for West Ferry, Inc. (a sister corporation of Fire Island Ferries) in 1984. However, the relationship with the Blount shipyard dates back to 1971 when Ed Mooney first met Luther Blount to have him build the Capt. Patterson, a 300 passenger, steel hull ferry for Fire Island Ferries.

In his own words, Ed describes the building of eight Blount vessels in his fleet:

"I had a set of plans with me for the boat we wanted and Luther tried to talk me into building a boat of his design that would be much easier and cheaper to build and would only require two engines, not three as on our plans. We insisted on our plans, and shortly after, we had a contract. We operate in shallow water and draft is a major concern. Luther called when the framing was almost done and informed me that he had sent out the lines plan to check via computer and he was informed the vessel would draw 6 feet, which was unacceptable. Consequently, Blount's yard widened the boat out from midship aft to get four and one half foot draft, saving us a big problem at no extra charge. It worked out so well that we had him build three sister ships, the Fire Island Miss in 1976, the Traveler in 1977, and the Fireball in 1981. Blount also built the Vagabond, a 75 foot freight boat for us in 1979. We went back up to Blount in 1984 and had them build the Firebird, a 85 foot, 400 passenger aluminum ferry that was longer, lighter and faster than the steel hull ferries. Blount's in-house designer used our 75 foot lines and layout ofthe 85 footer for the gangways to fit the same docks. The engines, shafts, props and gears matched those of our other ferries. We went back up in 2000 to order another 85 foot, 400 passenger aluminum ferry with three 8V2000 Detroit-MTU diesels. y regulation, we could no longer install our standard 12v71TIs. We took delivery of the Fire Island Flyer in June 2001.

"In August 2008, we contracted with Blount to build another 85 footer, this time with less passengers because of the stability requirement for increased passenger weight. We also used (3) Series 60 Detroits. We installed two of them in another boat that have worked out fine."

Ed concludes with: "The Fire Island Belle was named after the first ferry designed and built in 1948 as a fast ferry, semi-planing hull for the Great South Bay. Before that, all the fast ferries were converted rum runners. The new Fire Island Belle will be the eighth boat built for us by Blount. All the vessels are in service and each one gets better."

This news is a total 3371 time has been read