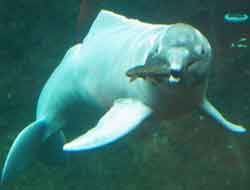 The last pink dolphins off Hong Kong's coast may be threatened by a US$1 billion (HK$7.8 billion) project to make the skies bluer.

The last pink dolphins off Hong Kong's coast may be threatened by a US$1 billion (HK$7.8 billion) project to make the skies bluer.

The project on South Soko Island and an accompanying undersea pipeline would be built close to where about 200 Indo-Pacific humpback dolphins live and breed. The government may decide within weeks whether easing air pollution - one of every four days has poor visibility - is worth threatening the mammals' habitat.

"It's a matter of balance and scale," said William Barron, a professor at the Hong Kong University of Science and Technology's environment institute. "They're reducing one very, very large environmental problem at the cost of a modest increase in another."

Environmentalists and dolphin watchers say they are concerned the project will harm the dolphins, which are pink because of blood circulating in the outer layers of their white skin to regulate body temperature. The mammals were the official mascots for the handover ceremony in 1997.

Up to a dozen dead dolphins are seen every year in the shipping channel, says Janet Walker, a senior tour guide at Hong Kong Dolphinwatch.

"Dredging a channel right through the dolphins' habitat won't be very healthy," she said.

Neither is the air. Hong Kong's air contains almost three times more soot and other pollutants than New York's and more than double London's, according to Hong Kong University. The number of days in which visibility was less than eight kilometers rose to 102 in 2005 from 40 in 1997, the Hong Kong Observatory says.

Environmentalists have criticized CLP and Hongkong Electric for being the major polluters, and the government ordered them to cut emissions. Hong Kong wants to reduce four major pollutants by as much as 55 percent by 2010.

Chief Executive Donald Tsang Yam-kuen has said Hong Kong's air quality is unacceptable, and has pledged to "fix it."

It would take four years for a joint venture owned 60 percent by ExxonMobil, the world's largest publicly traded energy company, and 40 percent by CLP to build the proposed gas terminal. The project includes a jetty, three storage tanks that could hold as much as 180,000 cubic meters each and a 38km pipeline to the Black Point power station at Tuen Mun, CLP commercial director Richard Lancaster said.

"ExxonMobil and CLP share the same opinion on the environmental aspect," said Raymond Wong, a spokesman for ExxonMobil in Hong Kong.

CLP needs 300 million cubic feet of gas every day to meet government emissions targets, Credit Suisse Group said. Daily deliveries from the Yacheng field off southern China will fall to 170 million cubic feet this year, and reserves will be depleted by early next decade, the company said. CLP is negotiating with potential suppliers for the new terminal. No details have been released.

"The project is vital to CLP and to Hong Kong to increase the use of natural gas," chief executive officer Andrew Brandler said. "We're running out of gas. We're having to rely too much on coal- fired generation."

CLP says it chose South Soko Island from among 29 possible sites for the terminal. The facility is away from shipping lanes and will have minimal visual impact.

Yet the government designated the waters around the Soko islands as a marine park in 2002 to protect pink dolphins, finless porpoises and rare corals. There are about 1,500 pink dolphins in the Pearl River Delta area, the Agriculture, Fisheries and Conservation Department said.

The Convention on International Trade in Endangered Species of Wild Fauna and Flora has listed the mammals as threatened with extinction. Beijing labeled them a "national key protected species." Still, an Environmental Protection Department advisory board endorsed the proposed terminal last month.

"The impact on the seabed is relatively temporary, and the number of dolphins will be restored upon the project's completion," said Ng Cho-nam, a Hong Kong University geography professor who chairs the advisory board.

CLP plans to establish two marine reserves near the gas terminal, but that has not placated critics.

"The location is in an area where you can see Hong Kong's only two resident marine mammals live together," said Clarus Chu, marine conservation officer at WWF Hong Kong. "The reason so many marine species live here is because this is a better place for them."

This news is a total 8053 time has been read