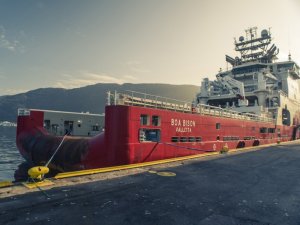 Norway’s Boa Offshore says that its current dire financial situation has lead it to commence work on a restructuring proposal to be presented to creditors, banks and bondholders.

The offshore vessel owner said its situation has become significantly worse than anticipated as recently as only a few months ago, and that its liquidity situation is now severe. It expects to breach liquidity covenants over the coming months.

Boa cited a higher than anticipated decline in the OCV market and weaker performance of its tug fleet as the key reasons for its predicament.

Helge Kvalvik, CEO of Boa Offshore, commented: “Boa Offshore is now deeply affected by the market situation. The outlook continued to weaken throughout this fall, and our financial situation is such that we have to go to our financial creditors. We will strive to carry out such discussions in an open and constructive way.”

Boa says discussions with creditors will be ongoing and the company will continue to operate normally in all respects. Pareto Securities and SpareBank 1 Markets are assisting as financial advisors in the restructuring process.

Boa Offshore has a fleet of 35 vessels.

This news is a total 1533 time has been read
Tags: Boa Offshore initiates financial restructuring