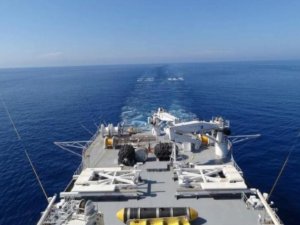 The US Bureau of Ocean Energy Management (BOEM) has issued a final environmental impact statement (PEIS) for proposed geological and geophysical surveys of the Gulf of Mexico regarding possible oil and gas development.

It finds that the surveys would pose a danger of significant harm to marine mammals.

Projecting for air gun blasting over the next decade, the statement estimates millions of creatures - Including hundreds of sperm whales, plus other whales and dolphins - would be harmed.

Air-gun blasting involves seismic air-guns blasting compressed air through miles of water down to the seabed in the quest for oil and gas beneath the ocean floor.

Blasts can occur at 10 second intervals 24/7 for weeks or months at a time.

Environmental group Earth Justice and the Tucson, Arizona based Center for Biological Diversity, used the PEIS to highlight the danger represented to marine life and environments.

But the American Petroluem Institute (API) and the International Association of Geophysical Contractors (IAGC) criticizad the PEIS.

An API statement said the PEIS was based on a ''flawed interpretation of scientific data''.

And IAGC said the PEIS ''ignores the best available science'', adding that for 50 years seismic suverys have been conducted in marine ecosystems that have continued to thrive.

Both bodies say the industry's mitigation efforts did not get enough credit.

Founded in 2010, BOEM is an agency that is part of the Department of the interior (DOI) and which manages the exploration and development of the nation's offshore energy and mineral resources.

This news is a total 766 time has been read
Tags: BOEM says sesimic surveys in Gulf of Mexico harmful to marine wildlifa