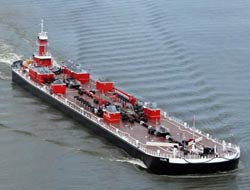 Bollinger Gulf Repair and Bollinger Algiers, have completed the retrofit and conversion of a Bouchard Coastwise Management barge and tug to an articulated tug and barge (ATB) unit utilizing the Intercon Coupler System.

Bollinger Gulf Repair and Bollinger Algiers, have completed the retrofit and conversion of a Bouchard Coastwise Management barge and tug to an articulated tug and barge (ATB) unit utilizing the Intercon Coupler System.

At Bollinger Gulf Repair, the 446-foot, black oil Barge B. No.195, now renamed Barge B. No.295, underwent life extension work and was transformed from a single hull to double hull vessel to meet the requirements of OPA 90.

A new ballast system was installed, and the stern modified with matching Intercon ladder to accept the bow of the 127-foot tug Bouchard Girls.

At the Bollinger Algiers facility, conversion of the Bouchard Girls included retrofit with Intercon ram assemblies and installation of a keel cooled Detroit Diesel 8V-71 generator set producing 99 kW as back up for powering the Intercon hydraulic system and main generator.

Morton S. Bouchard III, president and chief executive officer of Bouchard Transportation Company Inc., said, "We are pleased to announce that we have taken delivery of our fifth retrofit unit, the BOUCHARD GIRLS and the B. No. 295 from Bollinger. This redelivery of a modern, compliant, OPA 90 barge into our fleet represents another step forward in our company's commitment to the petroleum industry."

Before the tug and barge arrived, the shipyards pre-fabricated, sandblasted and painted components used in the conversion.

The barge was converted and inspected to the applicable rules of the American Bureau of Shipping (ABS) for Class Maltese A-1 Oil Tank Barge and the U.S. Coast Guard for the carriage of petroleum products of Grade A and lower, for Manned Services in Oceans.

Ben Bordelon, executive vice president repair, of Bollinger said, "This double hulling of the Bouchard B. No 295 and the refit of the tug Bouchard Girls using two separate Bollinger facilities exemplifies Bollinger's unique ability to work with the needs of our customers to complete the job. By using the strengths at our various facilities, we are able to mix and match facility and personnel strengths to accomplish large projects, such as conversions, retrofits and re-builds".

The patented Intercon system provides a single degree of freedom allowing the tug to pitch about a transverse connection between the tug and barge. All other motions are restrained so that the tug motions match barge motions in roll and heave. The connection is mechanical, using two independently mounted ram assemblies, gear driven, and configured for tug installation. The rams stroke transversely, engaging the vertical ladder structures incorporated onto both sidewalls of the stern notch of the barge. The resulting connection is rigid, mechanically locked, and fail-safe.

This news is a total 870 time has been read