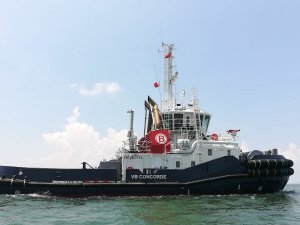 Boluda Corporación Marítima subsidiary Boluda Towage is considering ordering new tugs for its northern European fleet after its €300M (US$330M) acquisition of the joint venture Kotug Smit Towage (KST) in Q3 2019, ahead of its centenary celebrations.

Established in 1920 in Valencia, Boluda Towage has amassed a fleet of more than 320 tugs operating in 90 ports in Europe, Africa, the Americas and Indian Ocean. That was bolstered in August with the addition of the KST, a joint venture between Kotug International and Royal Boskalis, its fleet of 67 tugs and operations in Benelux countries, Germany and the UK.

Following the acquisition, the group is repainting the KST tugs into the Boluda Towage colours either at sea or in drydock, Boluda Towage UK general manager Phil Dulson tells Tug Technology & Business. But this is the only change, as Boluda Towage has kept almost all KST staff and is willing to invest further in the fleet.

“Safety is at the forefront and so is reliable service to our clients and that means investment in new assets and crew,” says Mr Dulson. “As part of a bigger group, we have the finance to invest in new tugs. We have access to a larger network to offer more port operations.”

He sees benefits for the UK and beyond from operating within this larger group. “We increased market share, increased utilisation and can share best practice across the organisation,” says Mr Dulson.

This enables Boluda Towage to boost its operational capacity when demand in ports and terminals increases.

“Our objective is growth and to commit to investment,” Mr Dulson continues. He explains that Boluda Towage’s management is still gaining a better understanding of the former KST business it acquired. However, their strategic ambition is to enhance the existing fleet and expand. “They may look for growth in new ports,” he says.

The acquisition goals were to consolidate Boluda Towage’s prospects, strengthen its position as a European tugboat market leader, open up new opportunities and boost innovation. It has increased its presence in the following major European ports:

Boluda Towage also strengthened its position in Germany, specifically in Hamburg and Bremerhaven, where it has been operating since 2017 since acquiring German enterprise Urag.

He says the need to order new tugs comes from the increasing size of container ships entering European ports.

An example in September was the arrival of one of the world’s largest container ships, 23,756 TEU-capacity, 228,741-gt MSC Mina at the Port of Algeciras, Spain. MSC Mina arrived during its maiden voyage from the Chinese port of Xingang to northern Europe, a service operated jointly with Maersk. This 399.8-m long super giant, with 61 m beam, required assistance from Boluda Towage’s tugs VB Juan Gonzalez, VB Titan, VB Tron and VB Andalucia on its port entrance and berthing.

Fleet growth will also be driven by new or expanded European terminals.

It took delivery of VB Concorde and VB Mirage from Piriou’s shipyard in Vietnam as part of a much larger newbuilding campaign. They assist tugboats VB Ouragan and VB Croisic, which Boluda Towage already operates in the French port.

“We have invested in new equipment in anticipation of future changes in port operations,” says Boluda Towage France general manager Denis Monserrand. “The port of Nantes-St. Nazaire is the base for the world’s largest LNG tankers and has recently increased capacity to accommodate the largest container ships. These new and powerful tugs are equipped with FiFi1 firefighting equipment and are prepared to respond to any challenging situations that may arise.”

Piriou built these two 30-m escort and harbour support tugs to its own OST 30 design. VB Concorde and VB Mirage are the first of an eight-tug newbuilding series Boluda Towage France ordered from Piriou.

The next two tugs in this series were officially ordered in May 2018 and are scheduled to be delivered by the end of 2019.

Two tugs ordered as part of this series in January 2019 will be delivered in May 2020. Two more are expected to be built for delivery before the beginning of 2021.

All eight tugs will have bollard pulls of around 73-75 tonnes, sufficient to assist the largest container ships, LNG carriers and cruise liners.

In the UK, ultra-large container ships arriving in Southampton are putting pressure on existing towage vessels. A member of Boluda Towage’s dispatch team says there could be requirements for more powerful tugs in Southampton to manage more visits from larger ships.

Increasing numbers of tugs are required to manoeuvre the largest container ships and tankers along shipping lanes and into UK terminals.

Zodiac Maritime operations manager Stuart Robertson says up to four tugs are needed to assist very large crude carriers and Suezmax tankers into terminals, including one ready to assist if there are issues. He says tugboats need to be powerful and highly manoeuvrable for these operations. They need a higher bollard pull and to be ready to tackle greater vessel forces in different weather conditions.

“We have four Svitzer ASDs for dynamic towage and manoeuvring container ships,” Mr Glendinning explains to TTB. “There is a 90˚ bend in the channel, so we had to work out how to get these ships around the corner safely in wind speeds up to 30-35 knots.”

This was achieved through simulating towage operations and training tug crew. “We then know what the towage resources are and the weather parameters we can handle ships in,” says Mr Glendinning. “We work out safe operations for tug assistance, train the pilots and understand the tug power requirements.”