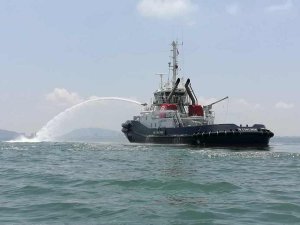 It has taken delivery of VB Concorde and VB Mirage from Piriou’s shipyard in Vietnam as part of a much larger newbuilding campaign.

Piriou built these two escort and harbour support tugs to its own OST 30 design. These 30-m tugs will operate in the port of Saint-Nazaire, France, where Boluda already operates the VB Ouragan and VB Croisic tugboats.

VB Concorde and VB Mirage were built as the first two of an eight-tug newbuilding series Boluda France ordered from Piriou.

The next two tugs in this series were officially ordered in May 2018 and will be delivered by the end of 2019.

Two tugs ordered as part of this series in January 2019 will be delivered in May 2020. Two more are expected to be built for delivery before the beginning of 2021.

All eight tugs will have bollard pulls of around 73 tonnes, sufficient to assist the largest container ships, LNG carriers and cruise liners.

At least six tugs of the tugs Boluda ordered from Piriou are expected to operate in French harbours.

Piriou has built tugboats for Boluda France since 2007. The last series of newbuildings it completed comprised of six tugs, built in Vietnam between 2015 and 2017.