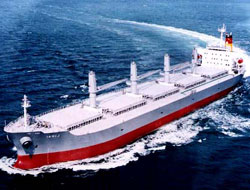 Low demand and fewer than expected weather-related delays meant European aframax markets were not as strong as anticipated.

Low demand and fewer than expected weather-related delays meant European aframax markets were not as strong as anticipated last week.

Bookings so far this week for cross-Mediterranean voyages and for trips from the Black Sea to the Mediterranean remain sluggish.

But rates for these routes should at least find some support from loading delays at France"s Fos-Lavera port.

60 ships waiting to discharge their cargoes

Aframax owners operating in the North and Baltic seas do not have that support and rates here were forecast to slide further in coming days.

?Normally at this time of year, we could expect a pre-Christmas rush to book January loadings, but it"s just not happening,"" said an Athens-based broker.

?Charterers are waiting in an effort to bring rates down. While they have fallen over the last few days, historically they are still at fairly high levels.

?Some aframax charterers in the Mediterranean that do have cargos they want to move are also booking larger suezmax vessels, as they are cheaper to hire at the moment,"" he said.

Rates for voyages on the Baltic Exchange"s TD11 route, covering trips across the Mediterranean from Banias in Syria to Lavera in France, are trading at around W220, the analyst said.

The Exchange"s TD7 route, based on a trip from the Sullom Voe oil terminal in the Shetland Islands to Wilhelmshaven on the German North Sea coast, is fetching a rate of around W155, he added.

The Baltic Exchange"s TD9 route, for a voyage from Puerto La Cruz, Venezuela to Corpus Christi, Texas, is up to about W300 but should fall back by the end of the week as demand weakens again, he said.

This news is a total 1232 time has been read