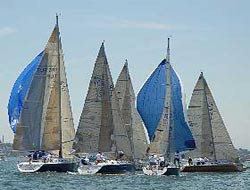 This weekend more than 100 sailboats and almost 1,000 sailors from Turkey and Europe will be racing through the Istanbul Strait to reach for the glamorous trophy in the Shop & Miles Bosphorus Cup.

This weekend more than 100 sailboats and almost 1,000 sailors from Turkey and Europe will be racing through the Istanbul Strait to reach for the glamorous trophy in the Shop & Miles Bosphorus Cup.

The main question before the sixth year of the Shop & Miles Bosphorus Cup is whether Sedat Gülça?layan's glorious sailboat, the O?uzhan Too, will be able to hold its title. Designed by the world famous boat design office Farr, the O?uzhan Too won the trophy in 2004, just after it has been brought toTurkey.

A possible three-year winning run of the O?uzhan Too was ruined by Ergin ?mre's Provezza in 2005, when the Bosphorus race was cancelled due to technical problems and the winner was announced after the tour in open waters in Caddebostan.

Following the opening cocktail in Reina, where the skippers' briefing was held yesterday, the tournament begins with the race on the Be?ikta?-Rumelihisar? track on Saturday noon. The second stage is on Sunday on the Caddebostan-Islands track, and starts at 10 p.m. Later that day, the winner will receive the Silver Cup, a special trophy designed by the acclaimed Can Yalman.

This year the events will host two important teams from the Balkans, with Farr 52 Greece and Bavaria Match 42 of Bulgaria, both considered the most successful sailboats of their countries. Adjoined with a French team, Turkish sailboat Avare will also compete in the Bosphorus Cup.

The boats are generally designed only for racing, with lengths ranging from seven to 15 meters. The size of a boat defines the number of the crew, as the biggest boat can have a team of 12 sailors. Each boat has its owner and also a skipper to make the decisions, while the rest of the crew share different duties onboard.

With its geographical situation, the Bosphorus is always open to winds and strong streams, somtimes up to three or four nautical miles, making the sailing harder yet more exciting. On the other hand, the stream in the capes, such as Arnavutköy, Kandilli or A?iyan, is from south to north, which is in the opposite direction than the Bosphorus. It is certain that The Bosphorus Cup and sailing enthusiasts benefit from this unique quality of the region. The team that can react the natural effects fastest gets the best out of its sailboat, and of course the one with the best internal communication will win the Silver Cup this weekend. But no matter what the result is, the boats sailing on the Bosphorus will be worth watching, as the events will be visible from the seaside all weekend.