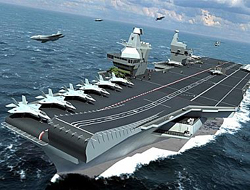 £90m worth of contracts have been announced for steelwork, modular cabins, galley equipment and other components for the Royal Navy's new aircraft carriers.

£90m worth of contracts have been announced for steelwork, modular cabins, galley equipment and other components for the Royal Navy's new aircraft carriers.

£90m worth of contracts have been announced for steelwork, modular cabins, galley equipment and other components for the Royal Navy's new aircraft carriers, HM Ships Queen Elizabeth and Prince of Wales.

The key contracts announced today, Friday 16 January 2009, which are expected to sustain some 190 jobs nationwide at peak production, include:

£50m for steelwork for bow sections of the two carriers, to be carried out at Babcock's Appledore Shipyard in Devon, sustaining some 150 jobs at peak production;

Furniture to be installed throughout the ships, £4.4m, McGill Services Ltd;

Early steelwork for the bow unit of Queen Elizabeth commenced in Appledore in December.

"Walking on the prepared steel plate destined to become an internal deck on HMS Queen Elizabeth gives everyone at the shipyard a sense of expectation. We have been making progress in engineering and procurement on this programme but we can now see the reality of a ship in build.

"Later this year we will see production start in the main shipyards, where the overall scale of the carriers will become clear. Just days into 2009, there is a real sense of excitement among the partners and confidence in the momentum behind this project."

Geoff Searle, Programme Director of the Aircraft Carrier Alliance, on the tour of the site, said:

"After many years of design, engineering and planning work across the whole of the Aircraft Carrier Alliance, it is fantastic to be in Appledore to see physical proof of the project moving into the next phase. It is also an excellent example of how this iconic project will involve companies in many parts of the UK, creating and sustaining thousands of jobs, like those of the 14 new apprentices taken on here in Appledore, the first for six years."

Today's announcements form part of the £3bn manufacture contract, which was awarded by MOD to the Aircraft Carrier Alliance in July 2008.

Work on the ships is expected to create or sustain 10,000 jobs in the UK at its peak.

This news is a total 827 time has been read