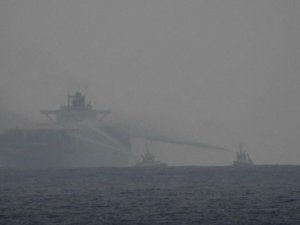 Containers on board of boxship APL Austria inflamed at Coega Anchorage in Algoa Bay off Port Elizabeth, South Africa.

The fire started early in the morning on February 13, engulfing dozen of containers on the main deck amidships. At the scene of the accident were sent two tugs, which started pouring water over the flames. It was decided that the non-essential crew from the container carrier APL Austria will be evacuated due to safety reasons. The firefighting continue several hours, but after estimating the there were no dangerous and hazardous goods affected by the flames, the ship was towed and berthed in Port Elizabeth’s Coega Industrial Development Zone. The smoke is still billowing from the ship, but firefighting from shore and tugs from the seaside and pouring water over the burning container carrier.

“Our team is assisting with the firefighting operation. We are still assessing the situation and are assisting where we can”, said the Port Elizabeth Harbour Master, Captain Brynn Adamson. “The vessel has 21 crew members of which non-essential personnel have been evacuated. Transnet National Ports Authority firefighters, as well as other members on board are assisting”, added he.

The local authorities are strictly monitoring the situation. There is no report about water pollution, but the thick smoke covered the port area. The citizens in vicinity were warned to close windows and doors to prevent smoke poisoning.

This news is a total 1054 time has been read
Tags: Boxship APL Austria caught fire in Algoa Bay off Port Elizabeth, South Africa