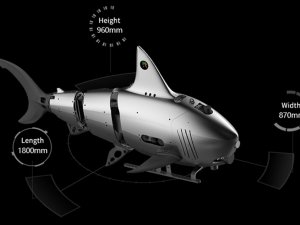 A Chinese manufacturer has unveiled a small, shark-like, military Autonomous Underwater Vehicle (AUV). The Robo-Shark is designed to have a high underwater speed and large payload capacity for its size.

Its manufacturer, Boya Gongdao Robot Technology, also states that it has stealth features.

Robo-Shark could be used for intelligence, surveillance and reconnaissance missions called ISR. This can include surveying the seafloor, searching for objects of interest, or for communications. The manufacturer suggests that it can perform fast approach intercepts, presumably of possible enemy divers, high-mobility patrol, and track underwater targets at high-speed.

The small vehicle was unveiled at the iOceans China 2019 event held in Sanya, China, on October 26. Underwater technology expert Stephen Hall, who was present at the event, noted that it was one of several biomimetic AUV designs on display. Biomimetics involves imitating nature to solve complex engineering or technology problems. In the underwater arena, it means fish-like submersibles.

The menacing shark features are not all about aesthetics. Beneath the attention-grabbing exterior is a serious trend in underwater technology. Increasingly engineers are turning to nature for inspiration. Boya Gongdao says that the fish-tail propulsion has an efficiency is up to 80%. It also has lower power consumption, which should improve battery life.

The fish-tail propulsion is also said to be quieter than a conventional propeller. This is particularly important in naval warfare because sound travels much faster underwater, so stealth often centres around reducing the noise signature of the vehicle. To this end, the outer casing is also made of sound-absorbing material.

The Chinese are not alone. Research into fish-like submarine propulsion goes back decades but has intensified in recent years. In 2013 the U.S. Navy developed the GhostSwimmer unmanned underwater vehicle (UUV) as part of the Silent NEMO program. Built for Office of Naval Research (ONR), this craft was approximately the same size as Robo-Shark. But it had a more tuna-inspired form. Its purpose was to test the low observable characteristics of bionic designs. The technology was proposed for intelligence gathering and harbour patrol.

Other groups exploring biomimetic underwater vehicles include the European Defence Agency (EDA), which recently initiated the Sabuvis-II program. This too will be used for intelligence missions.

Boya Gongdao also gave details of a smaller Robo-Fish model, a more modest design that has a hybrid drive combining regular propellers with a fish-tail. It is better suited to civilian applications where range and stealth are less of a commodity. A prototype is already in the water.

It is not clear whether the Robo-Shark will be ordered by the Chinese military. The Chinese Navy has begun to develop underwater robots. Last month they unveiled the HSU-001 design which is comparatively conventional in design terms.

There is no confirmation of any plans to attach laser beams. Jokes aside, biomimetics is a serious trend in underwater warfare.