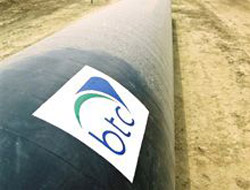 BP Plc and partners will expand the capacity of their pipeline from Azerbaijan to Turkey by 20 percent next year, the pipeline's Turkish manager said.

BP Plc and partners will expand the capacity of their pipeline from Azerbaijan to Turkey by 20 percent next year, the pipeline's Turkish manager said.

BP is currently pumping about 875,000 barrels of crude a day to the Turkish Mediterranean port of Ceyhan, Can Suphi, the pipeline's manager for Turkey, told reporters in Ceyhan today. Capacity will rise to 1.2 million barrels a day in 2009 and as much as 1.6 million barrels by 2013, he said.

About 300,000 barrels a day are currently arriving in Ceyhan via another pipeline from Kirkuk in northern Iraq, said Salih Pasaoglu of Turkey's state pipeline company Botas. There have been no interruptions in delivery from Kirkuk for the past three or four months, he said.

BP will invest in storage and loading facilities to meet the additional capacity, Suphi said, without giving any cost estimates. There are currently no plans to ship Russian, Kazakh or Iranian gas through the pipeline, he added.

The Turkish government has earned about $1.5 billion from the pipeline in the 21 months since it's been operating, Suphi said.

Israel is interested in acquiring Azeri crude and possibly shipping it across the Red Sea to reach markets in India and China, Pasaoglu said.

This news is a total 2818 time has been read