BP is Striking Out in a Hotspot for Offshore Oil Exploration 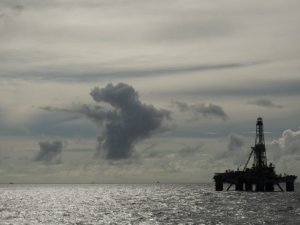 It was supposed to be BP Plc’s big Brazilian breakthrough after years of setbacks in one of the world’s top destinations for offshore oil.

The potential bonanza is still out of reach, two years after the London-based major teamed up with Brazil’s national oil company and a unit of China National Petroleum Corp. to outbid two rival groups for the Peroba deepwater block. Data published by the National Petroleum Agency, or ANP, show the explorers haven’t found the kind of hydrocarbons that bring in money.

The first well, which typically costs $90 million to $150 million to drill, encountered only carbon dioxide and natural gas, according to the ANP data. Stand-alone natural gas fields aren’t profitable in Brazil’s deep waters because there aren’t enough pipes to get the molecules to consumers on land. That means Peroba probably won’t deliver riches unless further exploration leads to a large oil discovery.

The ANP’s press office confirmed the data and said large accumulations of carbon dioxide are possible in what’s known as the pre-salt region of the deepwater field. BP declined to comment on Peroba, as did CNPC’s office in Rio de Janeiro. State-controlled Petroleo Brasileiro SA, the operator, said the results are still being analyzed by the consortium.

While the minimum exploration plan was completed with the drilling of the first well, the companies continue to study the area, the Brazilian company said in an emailed response to questions. It declined to comment on the development of stand-alone natural gas fields in the pre-salt area.

“The pre-salt is good, but it’s not a sea of oil; there are still risks,” said Marcelo de Assis, the head of Latin American upstream research for Wood Mackenzie Ltd. “Deepwater gas is something that doesn’t work. All the developments are focusing on oil.”

Petrobras, which is calling the shots as the operator, has plenty of world class oil projects to keep it busy. A giant natural gas field the company discovered back in 2008 in the same deepwater region hasn’t been developed yet.

The intense competition for recent pre-salt blocks means that fields need to be in the 2- to 3-billion-barrel range to be profitable, according to Assis. For smaller discoveries, operators will need to renegotiate the terms or hand them back to regulators, he said.

While BP has been investing in Brazil since Petrobras lost its exploration monopoly at the turn of the century, the effort hasn’t delivered production or proven reserves the way it has for European rivals Royal Dutch Shell Plc and Equinor ASA, who took advantage of low oil prices in recent years to buy into existing pre-salt discoveries.

BP’s drilling campaign in the 2000s in deep waters off the coast of the Amazon River basin never panned out. In 2011, the company bought a group of assets from Devon Energy Corp. for $3.2 billion. It sold the only producing property for $135 million in 2013, and booked $2.2 billion in Brazil-related write downs from 2013 through 2016. None of its remaining Devon prospects have delivered any production yet.

Still, BP has plenty of chances left in Brazil. In July, the ANP approved an exploration plan for Pau Brasil, a pre-salt prospect that the company acquired in 2018 where it controls operations. It has stakes in 25 blocks in the nation and operates 6 of them, according to its website. And the country has three more deepwater auction rounds scheduled for this year and one of them offers access to  proven reserves. BP is among the 14 explorers registered to participate in that auction, the government said Monday in the official gazette.

BP Chief Executive Officer Bob Dudley has struck a cautious tone about investing in new rounds, saying earlier this month in a call hosted by JPMorgan Chase & Co., “You have to be careful there” because it’s possible to overpay. “We’ll really have to sharpen our pencil on that one.”

His comments track a wider strategic shift at the company. Rather than the old days of pouring endless dollars into the latest exploration hotspot, the company has pared spending. One of its biggest oil finds of the last decade was the result of BP running seismic data on a field it discovered in 1999 through a supercomputer, a vastly cheaper project than drilling a brand new well in an unfamiliar frontier.

It’s also shifted focus to so-called advantaged oil projects, which are cheaper to develop, and lower-carbon natural gas. Executives have said since at least 2017 that demands to cut both carbon and costs means some of its oil resources will remain in the ground forever.

This news is a total 432 time has been read
Tags: offshore oil and gas, offshore