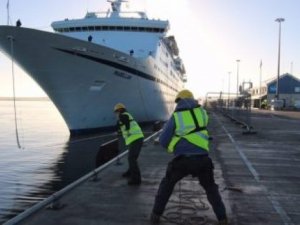 British Ports Association on Thursday stated that it “cautiously welcomed” the news of a withdrawal agreement between the UK and EU.

Chief Executive of the British Ports Association, Richard Ballantyne said that BPA cautiously welcomes the withdrawal agreement although there remains some fundamental issues for ports across Britain and Ireland to manage.

“We have repeatedly warned that a no-deal Brexit would be unacceptable and we now look forward to a more orderly process and reiterate our view that a future relationship should prioritise the flow of trade at our frontiers.”

“The trade between the island of Ireland and Great Britain is important and particularly that between Northern Ireland and Britain,” said Ballantyne.

On the other hadn the UK Chamber of Shipping has welcomed the new Brexit deal.

In a press communique issued on Thursday, the Chamber stated, “We broadly welcome the agreement reached by the European Union and UK Government. This deal provides the basis for a negotiated settlement with a transition period, something we have long called for.

“We recognise that much still needs to be agreed through part of any future trade deal. We will continue to work closely with the UK Government, and the EU, to ensure our world-class shipping industry can continue to trade freely with our European partners.”

This news is a total 173 time has been read
Tags: Brexit, British Ports Association, UK Chamber of Shipping