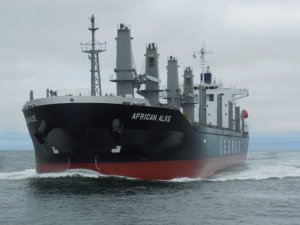 A brand new geared bulker on charter to a joint venture controlled by MUR Shipping and Jebsen has suffered an embarrassing setback in Australia.

The African Alke, owned by Japan’s Doun Kisen according to Equasis, and on long term charter to joint venture JEBMUR, which delivered just one month ago, has been detained by the Australian Maritime Safety Authority (AMSA) after it emerged that crew did not know how to operate the ECDIS onboard.

“The vessel was detained because the safety management system had not identified a lack of on board familiarisation training in the use of ECDIS,” an AMSA spokesman said.

The ship’s managers have flown an ECDIS trainer in from Singapore to train the crew.

“AMSA will release the ship from detention once it is satisfied the crew have been trained to an appropriate standard and can demonstrate the expected level of competency,” the authority added.

The technical managers who also supply the crew are B&S Enterprise from Japan.

The African Alke went through the Great Barrier Reef during its journey from Malaysia to Brisbane, via Mackay.

This news is a total 9970 time has been read
Tags: Brand new ship detained as crew are found to have no ECDIS training