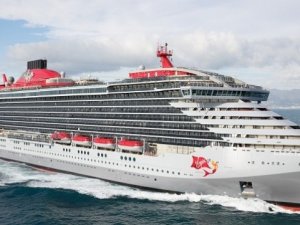 Virgin Voyages, the new cruise line that Sir Richard Branson’s Virgin Group had planned to launch in the spring of 2020 announced that it is again delaying its inaugural sailing season due to the ongoing impact of the coronavirus on the travel

Virgin Voyages, the new cruise line that Sir Richard Branson’s Virgin Group had planned to launch in the spring of 2020 announced that it is again delaying its inaugural sailing season due to the ongoing impact of the coronavirus on the travel and tourism industry.

“We’ve made the difficult decision to cancel our sailings through October 15, 2020. We’ve been working hard to find a way to set sail by August, but that hasn’t turned out to be possible,” said Tom McAlpin, president and CEO of Virgin Voyages in a message posted on the company’s webpage.

Virgin Voyages is now targeting October 16, 2020 for its first voyage. Previously the cruise line had planned its previews in mid-July and entry into service for August 2020.

Fincantieri delivered Virgin’s first ship, the Scarlet Lady, on February 14, and the ship had completed previews in England before the global onset of COVID-19. A series of high profile events planned for New York in March was abruptly canceled and the ship was rerouted during its trans-Atlantic crossing directly to Miami. Since then the Scarlet Lady has been in lay-up shifting between anchorage in the Bahamas and PortMiami.

The news of the postponement of Virgin Voyages’ introduction comes just days after reports that Branson’s Virgin Group was moving to raise cash and improve liquidity. The company filed documents announcing its intention to sell up to 25 million shares valued at an estimated $400 million of Virgin Galactic Holdings, Branson’s company that is seeking to develop commercial spacecraft. The announcement of the sale said, “Virgin Group intends to use any proceeds from sales of our common stock … to support its portfolio of global leisure, holiday and travel businesses that have been affected by the unprecedented impact of COVID-19.”

The first new large cruise line to be launched in years, Virgin Voyages has been in planning by Branson’s companies for nearly 10 years. Announced in December 2014, the company drew broad attention due to Branson’s reputation and unique approach to business. Construction began in March 2017 on the first of four 110,000 gross ton cruise ships each accommodating 2800 passengers.

Virgin’s total new build commitment is approximately €3 billion supported by a significant financial investment from Bain Capital in the launch of the new cruise line. Previously, Virgin Voyages said that Bain Capital fully supported the decision to postpone the launch of the cruise business and assured the travel industry that the company had sufficient financial resources.

Speaking about the highly anticipated introduction of the new cruise line, McAlpin emphasized the importance of properly executing the launch of the brand. He said, “When we launch, it has to be right.” The company has been promoting its planned ships as disrupters to the cruise industry highlighting the unique designs, amenities, and a more downtown, hip approach to cruising designed to attract people looking for different experiences.

Virgin Voyages originally planned to begin operations in April 2020 with the Scarlet Lady homeported in Miami and sailing to the Bahamas and the Caribbean. Its second cruise ship, the Valiant Lady, was due to launch in May 2021 sailing in the Mediterranean. Two additional cruise ships were scheduled to be delivered from Fincantieri in 2022 and 2023.

Describing the start-up experience McAlpin said in December 2019, “It has been quite a process of getting to where we are,” even before the latest events.  The cruise industry will continue to closely follow developments at Virgin Voyages.

This news is a total 250 time has been read
Tags: Branson's Virgin Voyages Postpones Launch