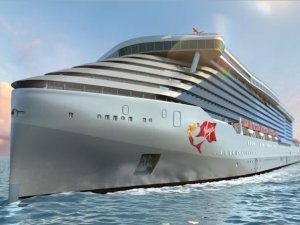 Sir Richard Branson’s new cruise line, Virgin Voyages, has provided the first look at the design of three new cruise ships it is building at Fincantieri in Italy.

The keel laying ceremony of the first ship for Virgin Voyages was held Tuesday in Sestri Ponente (Genoa), where the three ships will built.

Virgin Group founder Sir Richard Branson made an appearance at the keel laying ceremony, which was also attended by Tom McAlpin, President and CEO of Virgin Voyages, along with local officials and representatives from the shipyard.