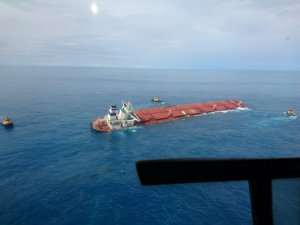 Following the listing of the giant oil carrier MV Stellar Banner off the coast of São Luís, in northeastern Brazil, the relevant companies and authorities are scrambling to avoid a potential environmental disaster.

Based on the latest information from the Brazilian Navy, dated February 27, there have been no fuel oil leaks confirmed until now.

The company has also requested that salvage specialists be hired in addition to Ardent Global, contracted by the owner of the vessel, Polaris Shipping, to remove the ship’s fuel oil and prevent potential pollution.

Ibama has been asked to displace response ships and other containment equipment off the coast of Maranhão.

Ardent Global remains on site carrying out an inspection of the structural conditions of the ship and has four tugs for support and response, in case of cargo or fuel oil leaks, the navy said.

The navy has dispatched Buoy/Lighthouse Vessel Garnier Sampaio and ocean support vessel Iguatemi to the site and an aircraft was also set to overfly the ship to assess the situation with the ultimate aim being the removal of the stricken ship from the area.

The vessel is stranded about 100 kilometers from the coast of São Luís (MA), outside the access channel of the Ponta da Madeira Maritime Terminal, from where it left on February 24.

The 20 crew members were evacuated from the ship, Vale said earlier.

This news is a total 875 time has been read
Tags: Polaris Shipping, Stellar Banner, Vale.