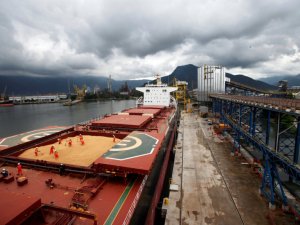 The canal’s administration is looking to increase its participation in rising Brazilian grain exports, since a large part of grain trade expansion in Brazil is via new terminals in the northern part of the country, which are closer to the canal.

Aprosoja is the entity representing soy and corn producers in Mato Grosso. Quijano was in Cuiabá, the state’s capital, for the signing.

Only about 2 million tonnes of Brazilian soy went through the canal last year, out of annual soy exports of around 60 million tonnes. Brazil is the largest exporter of the oilseed.

Most of Brazil’s grain exports are shipped via the Atlantic Ocean, passing by the Cape of Good Hope, to reach China and Japan. But capacity expansion in the northern ports and increased soy and corn production in the center-west might change that.

“We have studies showing that vessels coming from North Brazil and going to destinations like Yokohama could save up to five days using the expanded Panama Canal,” Quijano said.

He said the draft of the canal’s Panamax locks is similar to that of the Amazon ports.

Brazil’s northern ports increased shipments of grain volumes by 80 percent in 2017, according to government data, and already account for around 40 percent of total Brazilian grain exports.

Besides soybeans, Brazil has become a very large corn exporter. Large commodities traders such as Bunge, ADM and Louis Dreyfus have built operations in the northern ports and are planning to increase exports from the region.

This news is a total 975 time has been read
Tags: Brazilian Grain Producers Explore Increased Use of Panama Canal