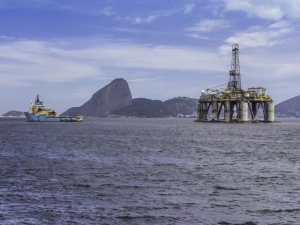 Brazilian authorities on Wednesday targeted Maersk and other companies for allegedly paying bribes to get an edge in securing shipping contracts with state oil firm Petroleo Brasileiro SA, in the latest phase of a sprawling graft probe.

Federal prosecutors said in a statement that Denmark’s A.P. Moller-Maersk, the world’s largest shipping company, was involved in allegedly paying $3.4 million in bribes related to 11 shipping contracts with Petrobras, worth 592 million reais ($141.07 million).
Maersk confirmed in a statement that its offices in Rio de Janeiro and Sao Paulo were searched by Brazilian police, adding that it would co-operate fully with authorities. Petrobras said it continues to work with authorities, adding the company itself is a victim of corruption.
Twelve search and seize warrants were carried out on Wednesday, prosecutors said, in order to further their investigation.
Maersk met with Brazilian investigators as far back as 2014 in relation to its dealings with Petrobras during the early stages of the corruption investigation.
This is the 70th phase of the Car Wash probe that unveiled wide-ranging graft, upending the country’s political establishment by implicating hundreds of officials and executives.
Prosecutors additionally named shipping brokers Tide Maritime and Ferchem as targets in the probe.
A representative of Tide Maritime said the company is unaware of the issue and continues to operate normally, declining further comment. Ferchem could not immediately be reached for comment.
The three companies are being investigated in relation to contracts with Petrobras totaling more than 5 billion reais ($1.19 billion), prosecutors said.
Companies allegedly bribed Petrobras employees for privileged information on the schedule of ships used to transport oil and derivative products in order to gain an edge in bidding for contracts, federal police said in a statement.
In the case of Maersk, the company used a brokerage that passed bribes to a Petrobras director, who has been actively assisting authorities in their investigation, prosecutors alleged.
The fact that Maersk would use a brokerage with little experience aroused suspicions, helping prompt further investigation, they said.
“We were able to verify that Maersk had chosen to hire a totally inexperienced broker, without any prior track record in the sector,” federal prosecutor Marcelo Ribeiro told a press briefing.