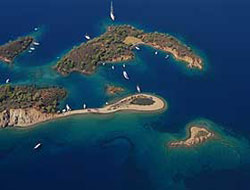 With its cluster of coastal coves and irresistible array of uninhabited islands, Göcek awaits to be discovered.

With its cluster of coastal coves and irresistible array of uninhabited islands, Göcek awaits to be discovered.

The village of Göcek between Fethiye and Dalaman is a place far removed from the hustle and bustle of modern Western living, where the legendary Icarus fell into the sea after flying too close to the sun.

The government has listed it among just 14 protected national heritage sites due to its natural surroundings and its fame in Turkey and abroad is increasing daily thanks to its clean waters and it being a rare harbor.

The first thing to do in Göcek is to take a yacht tour to see the island and its wonderful bays. Do not forget your camera to take photos of the Twelve Islands (Oniki Ada).

Göcek Island, which is just 10 minutes away from Göcek, is the best choice for those wanting to take a yacht tour since it is the closest beach to Göcek. Yachts ferry passengers from the early morning until evening. It is possible to camp under trees and to rest in placid corners.

Boynuzbuku Bay is covered with sweet gums that grow only in the region from Koycegiz to Fethiye and whose resin is used in treatment of some illnesses. It is possible to go to Kile Bay's pebbly beach by car.

Sarsala Bay has access overland. After passing Dalaman Centre, you will drive 12 kilometers after turning from Kap?karg?n village signboard. This road, taking 20 or 25 minutes, has impressive views.

It is possible to reach Küçük Sarsala Bay only by yacht. There is no beach here. However, there is a wharf from which you can swim and a restaurant serving until late hours. The old cities of Kaunos and Telmessos are close to Göcek. If you are interested in history, reserve some time during your holiday to see these places.

Göcek's marinas represent the town's main attraction and explain its reputation as a heaven for yachtsmen. When you take a trip to the quay, you will find yachts moored alongside tiny fishing boats in the harbor. The growing yachting industry has seen a rise in the number of jewelers, clothes stores and restaurants, but Göcek has retained its authentic coastal village atmosphere with local markets and carpet sellers providing a charming throwback to antiquity.

Skopea marina, which has been open for 15 years and can hold 85 yachts, takes its name from the bay known as Skopea Harbor.

The newest marina of Göcek, Port Göcek is operated by Camper & Nicholson, a world-famous firm. There is an office for people wanting to sell or buy a yacht in the marina where 180 yachts on land and 365 yachts at the marina can camp at Port Göcek, the third breakwater of the world, and the first of the East Mediterranean.

It is possible to find sea foods restaurants along the harbor. Lagos, gilt head bream and red mullet are among the local fishes. It can be nice to eat fresh fish accompanied by a view of the seaside with lights ablaze at nearby bars and restaurants. Do not forget to taste appetizers: Purslane, eggplant salad and sour ezme will contribute to your fish delight!

This news is a total 4011 time has been read