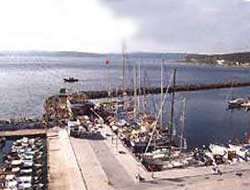 A bridge on the Canakkale Strait will be put on the agenda again.

A bridge on the Canakkale Strait, the largest investment of Turkish transportation sector after the third bridge over the Bosphorus (Istanbul) and Izmit Gulf Bridge projects, will be put on the agenda again.

Highways Dept. will submit the project to State Planning Organization (DPT) for approval.

Following the approval, international offers will be asked for the construction of the bridge and its belt highways.

The project that is expected to cost about 600 million YTL (one dollar equals 1.33 YTL) will be realized on a "build-operate- transfer" basis.

Canakkale bridge would be 2,196 meter- long. Total length of the project --with belt highways-- will be 13.7 kilometers.